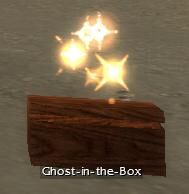 What do you mean "contrary to popular belief"? This was a game mechanic that worked for a long time. Are you saying it was suddenly changed?

Yes, that is precisely what I'm saying. It used to be a good way to exploit IWAY, but I tested it recently, and learned that Ghost-in-the-Box does not trigger IWAY either before, during or after dying. Euler278 23:31, 31 October 2007 (UTC)

I'm going to strike out the part that says "The ghost also attracts enemies attention ..." because I tested that, and it also doesn't work. If the GITB's ever took/held aggro, they stopped doing so in some patch. Euler278 23:39, 31 October 2007 (UTC)

I have a video of the ghost party in lions arch that day i found not long ago.. ill upload on youtube one of these days i also am sure i have an archive of old screens with them in it - Chrisworld 00:27, 2 November 2007 (UTC)

I can confirm. Feast of Souls also triggers on the ghosts for the Collector's Edition special dances (or whatever it is). Entropy