I tried to clarify the health regen/degen portion, but I fear I may have made it less clear. The concept is very simple, regen/degen is capped at 10, but the cap is applied after all effects are added up. Another thing this heavily affects is the degen that necro minions get, after a while it's so high that no amount of regen will help, straight healing is the only solution. Hopefully someone a little more eloquent than I can clean that paragraph up. 67.182.143.162 18:37, 1 Jul 2005 (EST)

There's been some discussion about this on Talk:Combat, but it's been determined that being "in combat" is simply different than having Natural Healing.

Right now it says that natural healing stops when you are at full health or lose health (from anything). But doesn't it stop if you attack someone, or use any skill that specifically targets an enemy? --JoDiamonds 09:29, 21 March 2006 (CST)

Having a neutral source cast spells on you also eliminates Natural Regeneration - just go out into the Isle of the Nameless and watch as your health regeneration stops when a Master of Winds begins to cast Windborne Speed on you.--Ender A 09:02, 12 September 2006 (CDT)

youre fucking kidding me. karlos version had allmost no information in it. But I think theres too many small sub-articles now, needs rework... --Ollj 06:36, 20 Aug 2005 (EST)

I am voting for revert, because current version as Ollj said has too many subsections and the Karlos version had everything that needed to be here. Only thing the current version has new is the listing of all those skills and I am not convinced that we should list all the health affecting skills here. --Geeman 06:46, 20 Aug 2005 (EST)

I reverted. The content lost is mainly the note about necro skills stealing health or ignoring armor, that monks can heal, and the skill listings. This is an excellent time to mention the categories proposed for skills like "causes health regeneration" over in GuildWiki_talk:Style_and_formatting/Skills#Categories. Instead of keeping a list, we could just use a link to a category. --Fyren 07:44, 20 Aug 2005 (EST)

I'm all for linking to seperate pages listing profession-specific "Heal" and "Gain Health" spells... seems like an obvious thing to do with the Health page. Do we already have such pages in the Wiki? With separate pages, we would also have a bit more freedom to go ahead and list ALL the various Monk and Ritualist healing spells. Jioruji Derako 04:20, 3 December 2006 (CST)

This discussion is pretty old, but this article and heal are supposed to contain lists of skills that heal and cause health gain. They may or may not even be up to date even as of Factions (they're definitely not up to date with Nightfall). --Fyren 04:46, 3 December 2006 (CST)

Yeah, I kinda figured it was a bit old from the last post date... I just stumbled upon the article by accident. I think it would be a good idea to start, though. Perhaps it would make for a good resource for would-be Healer players, trying to figure out good heal spells to take along. Thanks for the reply though... perhaps if I can't find enough info on heals as it is, I could even go so far as to create an article myself (something simple as a list of self-heal spells would be a good resource for anyone who doesn't feel like searching entire skill lists). Jioruji Derako 06:18, 3 December 2006 (CST)

I was wondering if the maximum health is capped at somewhere. Because theoretically, you could easily go over 1000 hp with Vital Blessing + Symbiosis and some other strange enchantments.

Yeah we did it with 8 people full of enchantments in Isle of the Nameless. In fact we didn't manage to have all us enchantment in same time, max for 8 players zone would have been 10160 (maybe more now with nightfall skill).Deadjack 06:29, 26 January 2007 (CST)

Does any one know the absolute maximum health possible using all the items, runes and skills???--Cameronwilliams1993 20:04, 26 September 2007 (CDT)

I calculated that if you where a W/N with Symbiosis and 10 Monks in an AB you could get up to 18899 health, due to the facto that maintained monk enchantments stack. The Warrior would need 20 points in Strength, 12 in Blood Magic (i think), the Ranger would have 20 in Wilderness survival, and the Monks 20 in Protection (for Vital Blessing).--Wakleon 22:42, 26 November 2007 (UTC)

This obviously requires 12 Players in Urgoz or Deep using cons, +1/20% modifiers, and multiple weaponsets and headpieces (for strength). Every skill is calculated to provide the maximum HP it possibly can. However, Demonic Flesh is calculated at 19 blood magic. You get this from 12 attribute points, 4 more from cons, 2 from Awaken, and 1 from a +1/20% modifier. I'm not sure if you can get a Necromancer blessing from the Gods in Urgoz or the Deep. If you can, then this must be recalculated for 20, which is an additional 8 HP. There would be 12 players, each with 8 skills. That's 96 skills total. Defy, Endure, Signet, Feel, and Vital Weapon, along with Symbiosis, are the only non-enchantment spells. Symbiosis at 20 Beast Mastery gives 191 Hp per enchant. At 90 enchants, that's 17190 HP. --Neraphym-- 08:03, 23 November 2009 (EST)

Should we add a section of Items that gain/drain health as well? Right now it's Vampiric only, but we did see that new armor that adds +max health, and there might be additional item mods as well. LordKestrel 07:27, 21 March 2006 (CST)

Why is it that every article refers to Health in the lowercase form when the game specifically capitalizes every usage of it? I thought we were going by how the game capitalizes terms. -Savio 10:22, 22 April 2006 (CDT)

Actually, that very vote says we should captialize Health if the game does it... -User:PanSola (talk to the

I don't think Animate Vampiric Horror should be listed as a skill that causes health gain - the skill doesn't, it's the horror itself that does. On those grounds you could include the Verata skills as you can use them to steal other people's Vampiric Horrors. --NieA7 10:42, 25 July 2006 (CDT)

how do you sugguest we impart the information that vampiric horrors cause gain, if not by including the skill here? --Honorable Sarah

I didn't say I could fix it, all I said was it's broken :p On balance I think it should be listed as a skill that causes healing rather than a skill that causes health gain, assuming that the health gained by VH is affected by stuff like Life Attunement. Has anybody tested that? If it's not affected by LA et al then I think it should just be removed - as a skill it does not cause health gain any more than Verata's Gaze does. --NieA7 11:08, 25 July 2006 (CDT)

Because feast heals you. The distinction is some skills cause you to gain health. It makes a difference (usually, there isn't complete consistency) with the skills that amplify healing. There are too many skills that heal to list. --68.142.14.19 15:57, 29 July 2006 (CDT)

I wasn't aware of any inconsistency. Can you point out any of them that occure to you? (either "healing" that doesn't get amplified/reduced, or "health gain" that does). -User:PanSola (talk to the

You gain natural health regeneration while taking -0 damage, but all the other requirements must be made. To test, cast Life Barrier and Life Bond on a warrior. Cast Shielding Hands on yourself using an enchantments last 20% longer item and Blessed Aura. This works as long as you don't attack, use an offensive skill, get attacked directly.

For some reason these skills were not mentioned. Yes their health gain is conditional, but since illusion of weakness can be here I can see no reason for these two skills to be left out Martian Kyo 19:07, 25 December 2006 (CST)

Gaining health and healing aren't the same. Death's charge is healing. Retreat and other Nightfall skills aren't listed because no one's updated it. --Fyren 19:15, 25 December 2006 (CST)

Ok, maybe it wouldn't be a bad idea to add the difference between gain health and healed on the page itself, as a small note at least. I am not going to add it because I am not sure what the actual difference is. Martian Kyo 03:06, 26 December 2006 (CST)

Some skills reduce or augment "healing." Skills that say "gain health" are not affected by those skills. Well, usually... at least a couple are wrong, but that's probably a mistake between descriptions and effect, so not everyone at ANet is aware of it, apparently. --Fyren 04:28, 26 December 2006 (CST)

I've added Heal to related articles section, it is really important to point out that there is heal and gaining health at least in some way, to avoid future mislead edits such was mine. This article doesn't mention healing anywhere yet it mentions degeneration and other conditions. I really think these article should be merged Martian Kyo 03:47, 29 December 2006 (CST)
and I removed it now cause I just found the link to the page before. Silly me Martian Kyo 03:55, 29 December 2006 (CST)

This page's list of healing skills hasn't been updated since Nightfall. It's therefore trash...outdated information without a warning sign is worse than no information. I'm going to make a healing skills quick reference page (since as far as I can tell, we don't have one...maybe I should ask on the Skuld forum) and have this article link to it, deleting this useless list. Issa Dabir 12:13, 15 April 2007 (CDT)

Yep saw this article ages ago, its on my todo list at Category_talk:Skill_type_quick_references#articles to be added, good luck in creating it, there are a lot of healing skills lol. -- Xeon 12:19, 15 April 2007 (CDT)

about Health: how can you find out how much health a monster has ?

Only by counting exactly how much damage it takes to kill it. You can try to estimate by counting pixels in a screenshot where you know how much health a mob has lost, but the likely error goes up as the mob's health goes up. --Fyren 09:11, 20 June 2007 (CDT)

There are more skills then healing prayers that heal a target, it should also point to a definition of what healing is, which is where it is pointing to. -- Xeon 06:08, 25 July 2007 (CDT)

It is possible to achieve these maximum HPs with:

Using which skills at these levels, pray tell? 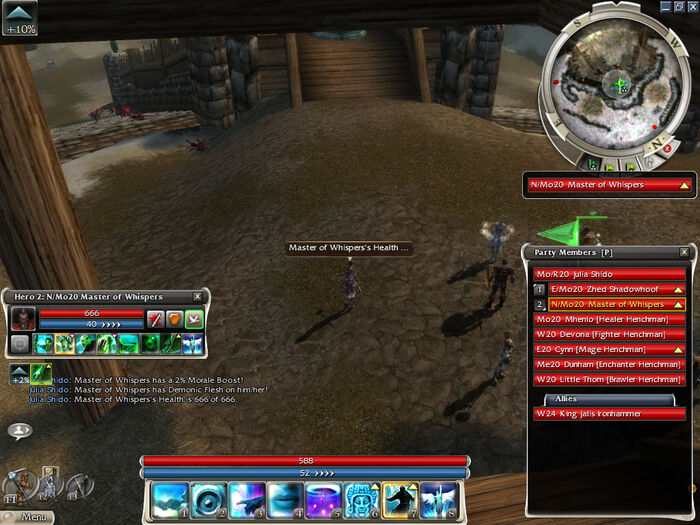 Well, if you use Defy Pain, you can maintain it (which is it's main strength). In general, they're useless unless you can have it end after the battle, or maintain it. ---

Whenever you gain or lose an effect that modifies your max health, your current health is modified by the same amount (with a lower limit of 1 Health). If you have Endure Pain giving you +250 Health, and at the time that it ends you had 500 of 700 Health, then both those numbers will be reduced by 250 to leave you with 250 of 450 Health. If you had 700/700 Health, you will have 450/450; if you had 200/700, you will have 1/450.
Viper explained why Defy Pain is useful - you can maintain it for a pseudo-permanent +250 Health. Compare it to a preventative drug, one that you take regularly to prevent a condition that doesn't affect you constantly (cf. corticosteroids taken daily to prevent asthma attacks). Endure Pain, on the other hand, is like a reactive drug, one you take after you already have symptoms of something (bronchodilators taken during an asthma attack). With Defy, you are preventing near-death situations by boosting your max Health ahead of time; with Endure, you can react to near-death situations by instantly bumping your max health (and in the process gaining the same amount of current health). Just like reactive drugs, though, you have to hope that the effect will outlast the symptoms - that Endure doesn't expire until the battle is over or you've been healed up. —Dr Ishmael