Shall we stub this? [Dr Titan|Dr Titan]

Can we get a few examples how the term is capitalized ingame? In the Oct 27 update they are referred to as "Hero Trainers". Unless we find an ingame example showing otherwise I'd say we move the article to Hero skill trainer. To capitalize Skill, but not trainer, makes little sense to me. --

"Hero skill trainer" is fine with me. I suggested "Hero Skill trainer"... because of Skill trainer I guess. Yea, you're right. Capitalizing the "S" and not the "T" looks weird. The in-game tag to these npcs are "Hero Skills". --Ab.Er.Rant

We all know that ANet's capitalization is very inconsistent, both ingame as well as in game update descriptions. We may find that they are spelled "Hero Trainer" in one place, "Hero trainer", "Hero Skill trainer" or "Hero skill trainer" elsewhere. I'd suggest that we move to hero skill trainer and allow for redirects from other variations of capitalization. --

Dont you find annoying that already unlocked skills are shown without a tag, and actually you can waist your points "unlocking" them. I suggest to put a "bug" tag about that. - Coran Ironclaw 02:45, 5 December 2006 (CST)

It's "waste" :P and it's not really a bug. It's just something they didn't put in. I remember reading about this in GWGuru about them planning to put it in later. I'll add the note (you could've just added the note instead putting here ya know...). --Ab.Er.Rant

This appears to be fixed. I don't see skills I've already unlocked in the trainers now. BlueNovember 17:46, 6 December 2006 (CST)

Yes and No, seems you don't see the skill offered if your PvE character has already learn the skill, but otherwise does show. For example, if "My Character A" is a W/Me that has already learnt Hammer Bash (say during a Prophecies quest), then Pikin in Kamadan won't show it, however if I then switch over the "My Character B" (same account) who is a R/Mo and never learnt Hammer Bash, then still shows the skill (even though all heros with Warrior profession would already have access to Hammer Bash since was unlocked by "My Character A"). So there appears to still be some confusion over heros and their "global" access to unlocked skills. --Wolfie

If you spend hero skill points on unlocking a skill for a hero. Will it then also unlock it for your PvP only characters? Or will it only unlock the skill for your heroes? -- DamadmOO 05:22, 4 January 2007 (CST)

If the character you are spending the points with has the same profession (Either primary or secondary) as the skill you are unlocking, it will unlock it for use on your PvP characters - GregPalo 05:28, 4 January 2007 (CST)

Umm... that page is correct... when you unlock a skill using a hero skill point, the skill gets unlocked for your account (meaning all your heroes will have access) and additionally the character performing the unlock learns that skill. --Ab.Er.Rant

I think devs should have made it clearer that your pve character simply learns and unlocks the chosen skill. After all it has nothing to do with heroes, and the name Hero Skill Trainer is confusing. During my first run in Nightfall, I didn't realize I could get "free" skills that way. This system is better than prophecies' skills given as rewards in quests, as you can chose what you get as a reward, but it wasn't clear enough to me. Utaku Mu Dan

You might want to suggest that on a fansite forum or send it to Anet directly. But what would be a good alternative yet still have some PvE flavor (rather than just a "Skill Unlocker"). I think it really was meant to train your heroes only. But imagine that you'd have to teach each of your PvE characters' heroes the same set of skills over and over again. That would be my guess on their original intention.
Tip: If you look at the little row of icons above the editing text box, one of them is for you to sign your comments, which is also nicely explained in the "Please note" section below the "Save page" button. --Ab.Er.Rant

Is it possible to get elite skills from Hero Skill trainers because I was on my Assassin and it looked like there was an elite skill available, although I wasn't able to get it 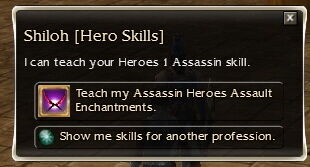 I'm pretty sure thats a bug they never got around to fixing or never noticed it, no one has been able to unlock it that way as far as I know.--Sefre

Yup, and worse yet, while you don't get the elite unlocked, apparently you do still lose the hero skill point (note, I have not been game enough to try it myself). --Wolfie

I'm fairly sure that is not true, unless it has recently been changed. About a month ago, I used a hero skill trainer to get a locked skill that wasn't available from the skill trainers in that area, but I didn't learn the skill - it was just unlocked, not learnt. Issa Dabir 16:58, 11 April 2007 (CDT)

Try switching your profession to the profession of the skill you unlocked. --Ab.Er.Rant

I'm not stupid enough to think I can use a skill for another profession! After testing, the page is correct for the current version of GW - buying a skill from a hero skill trainer learns it, not just unlocks it, but I'm sure that wasn't the way it worked a month ago. Then, it was a Dervish skill, and I was a Dervish (might have been trying to get a skill not available in that area, or trying to not pay any money, can't remember which) - but getting it from the hero skill trainer just unlocked it. I still had to buy it to use it myself. Issa Dabir 07:46, 12 April 2007 (CDT)

Sorry, Issa, didn't mean to be condescending. I guess I glanced thru your comment too quickly. The unlock and learn feature came with an update (don't remember which), so yea, it wasn't this way from the start. --Ab.Er.Rant

I used the Hero Skill Trainer when I first created my D/Mo about five months ago and as far as I can remember I've always learnt the skill I picked. Ghost1

I've been very confused about this until today. 'Hero Skill Trainers' are similar to 'Skill Trainers' in that the skill is learnt and unlocked, and differ in that they use Hero Skill Points instead of Skill Points, cost no money, and have a different pool of skills. If so, then all the talk about teaching the skills to your Heroes is confusing, since they automatically get access to unlocked skils. If so, then those facts should be promoted in the artical page and the teaching of the skills to your heres should be demoted, or removed. LLandale 07:48, 25 January 2009 (UTC)

Is it possible that originally the character did not in fact learn the skill and teaching the skills to your heroses was somehow different than 'unlocking' the skill? LLandale 07:48, 25 January 2009 (UTC)

It may have been like that it the beta weekend or something, but that's not the case anymore. For all intents and purposes, using a Hero Skill Trainer to learn a skill is exactly the same as using a normal Skill Trainer, except it's "free".