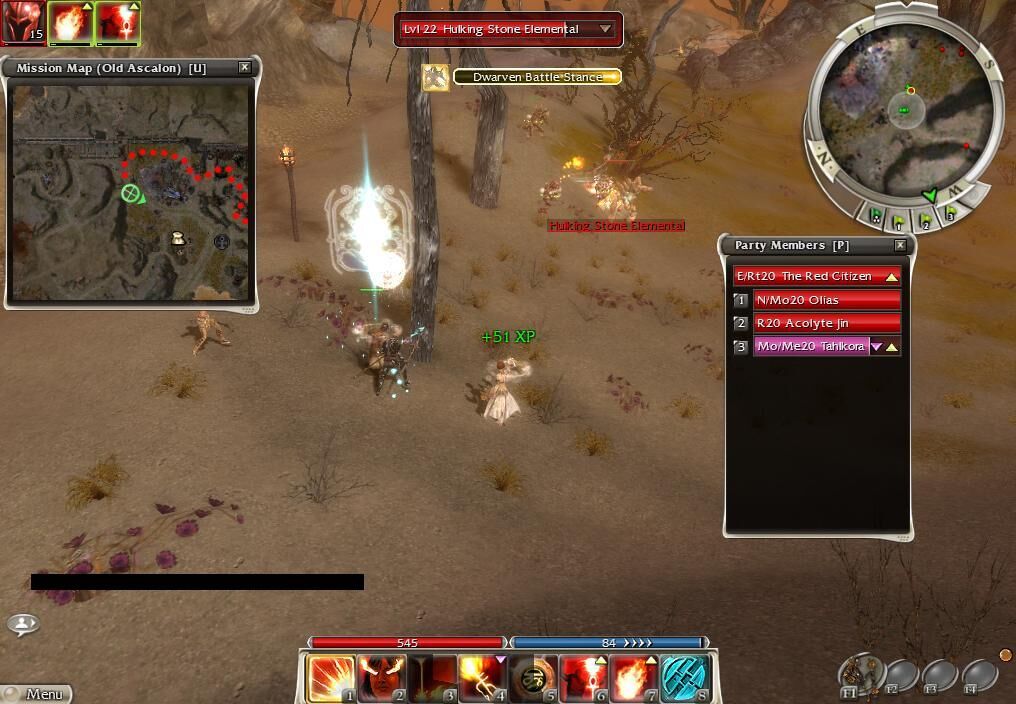 Considering how it wasn't interrupting me or my caster heroes, these guys aren't wielding hammers. Either that, or I wasn't paying enough attention, but I'm pretty sure that they weren't interrupting anything. --Kale Ironfist 07:32, 20 April 2007 (CDT)

Same. They never interuppted my healing signet nor any of my war's attacks. DBS is woefully out of place on them (and not just because theyre not dwarves). It's worse than the fact that blades of corruptions have shield bash but they don't use a shield --Blue.rellik 20:21, 24 July 2007 (CDT)

Well, the thing is, you can't activate Dwarven Battle Stance without a hammer equipped, so they must be using one. Either that or the AI cheats :/ --Gimmethegepgun 20:23, 24 July 2007 (CDT)

I was also thinking, why would something that drops rocks and charcoal...drop something nice like a saph? Its a burned deathly wasteland.. lol - Chrisworld 19:38, 14 June 2007 (CDT)

I was wondering, My W/E Uses an FDS with Conjure Flame and the Conjure flame damage to the Hulkings is lower then 16, which is what my skill says, 16 fire dmg. Are they using Dreadnought armor? - Chrisworld 12:46, 24 July 2007 (CDT)

Enemies have variable armor against different types of damage. In fact, skills almost never do their rated damage (obviously except for those which do armor-ignoring damage). See Damage calculation if you want a more in depth explanation. BigAstro 13:59, 24 July 2007 (CDT)

Should see if they have -40 armor vs blunt dmg. i think normal mode ones do.

Does anyone know if they deal physical, or elemental damage? I have a sword of shelter (+7 armor against physical) and it doesn't seem to help against them. Is the damage reduction too small to notice on +7 armor, or are they not doing physical? Euler278 05:56, 8 October 2007 (UTC)

+7 armor is tiny. Try using Armor of Frost instead, and see if that does anything. If they aren't dealing physical, then Storm Chaser would trigger energy gain. It's likely they don't deal elemental damage though. --Kale Ironfist 06:47, 8 October 2007 (UTC)

I tested it with Armor of Frost, and you're right -- it's physical damage. So how come +7 is so negligible? Why then would someone forgo a Staff Wrapping of Fortitude for a Wrapping of Defense? I heard somewhere that +5 armor is better than +30 health, because the total damage reduced (over the course of a lifebar) is greater than 30? Euler278 15:51, 9 October 2007 (UTC)

Because they have variable damage. And any selfrespecting warrior/dervish/ranger deals more damage than these guys, and then it does make a diffrence --