Yes, ever since Nightfall was announced as having an African setting I was hoping for a charmable hyena! DKS01 03:16, 3 November 2006 (CST)

Hoping they fix the tamer for heros since I want my ranger heros to have a Hyena :( --SK

Yep, these are still ugly in-game. I can't wait to run across some of these beasts in AB or HA so I can slaughter 'em. I still think hunting seasons should be set on the damn things >.< -Auron

Why they are some of the best looking pets in the game right next to the black bear and Melandru's Stalker Miki123troll 15:59, 7 August 2007 (CDT)

Where to Find Them[]

the noe says there is one in turias procession with a boss, is it possible to charm this one? ::Soqed Hozi::

As the article says, its not, I tried many times, if you can get there in time and it just appears as "Elder Hyena" instead of "Pet-Elder Hyena" it MIGHT MIGHT MIGHT be possible. Needs testing however Third

I have a feeling it's the same as with Hekets. You can't charm them in time. --Fiz

Can anyone confirm that tamable Hyenas will spawn in Ruptured Heart? I just went through there to tame one and couldn't find any. Rhia Aryx 17:23, 25 May 2007 (CDT)

I've explored every part of the ruptured heart on my Dervish and not once have i seen a Hyena there. I think it should be removed unless someone can provide a screen shot for proof. I do however know that they are in Crystal Overlook and Poisoned Outcrops.--Darksyde Never Again 14:38, 30 August 2007 (CDT)

I've confirmed there's at least one in Ruptured Heart: 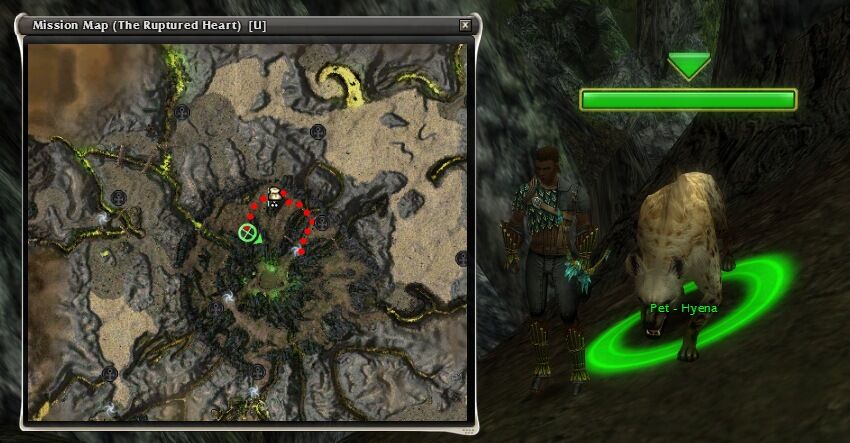 I don't think that strategy will work here for the same reason it won't work on the hekets -- Sergeant Behnwa has a beastmaster build, and needs a pet for it to work, so the only skill available for him to use before he has a pet is Charm Animal. Therefore he'll spam it the instant you come into draw distance, and he'll always charm the pet before you can close the distance and even try. --Eudas 11:44, 29 July 2007 (CDT)

Shouldn't the description include the sound they make? Or at least something more than "you can get this if you're a ranger in this place". Such a great animal shouldn't have such a lousy description.--Darksyde Never Again 14:40, 30 August 2007 (CDT)

Some hyenas are not what they seem to be[] 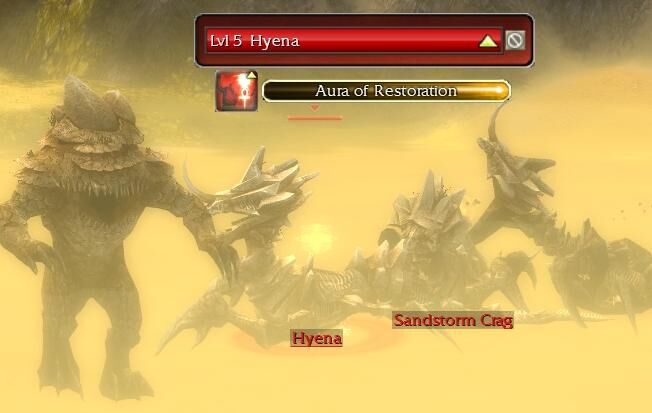