" He only spawns during the Quest "Eliminate the Jade Brotherhood" from Gardist Chienpo. "

This is not true... I did not have this quest active when I originally obtained this item, and I routinely see him spawn without the quest active. --the preceeding unsigned comment was made by Vyral

you can always tell when someone posts to the wiki with the interest of self promotion, because they're careful to edit everyone out of the picture except themselves. ;-P --Honorable Sarah 16:48, 2 May 2006 (CDT)

Kenshi Steelhand appears to be a fixed spawn that can be found by exiting Vizunah Square (Foreign Quarter) via the West Gate and heading onto Bukdek Byway. 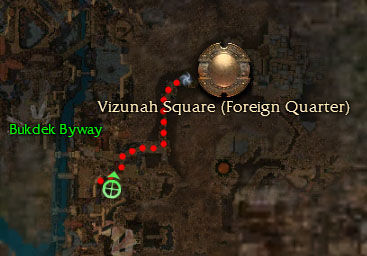 Head South and you'll encounter two groups of five Jade Brotherhood. Turn West and move down a ramp where you'll encounter another group of five. After dispatching them turn South down some stairs onto a Balcony where Oroku (Armor Crafter) NPC can be found. Take the ramp to the West and you'll find Kenshin Steelhand amoung a group of four Jade Brotherhood at the bottom. Beware of one or two 5-man patrols that move through his area, if you take him down fast you should only have to deal with one 5-man patrol add. Occasionally a Canthan Chest will spawn in his location so purchase a Canthan Key from Nanako (Merchant) for 450g in Vizunah Square (Foreign Quarter) if you want to test your luck. I have taken him down a few time now and he is yet to drop the Butterfly Daggers (or anything else of use for that matter). The run can easily be done with a group of Henchies and should take no longer than 5 minutes. --Syphon 23:22, 6 May 2006 (CDT)

how much do these go for these days ?

actually, they are zealous, and don't drop very often. as such, i see them going for 15-30k in spamadan about once every 2 months —The preceding unsigned comment was added by H2L (contribs) .