Where did you find him? Dasha Vestibule (mission) or Resplendent Makuun? I asume they have different elites — Skuld 07:50, 17 November 2006 (CST)

That could be very well possible, as most ruby djinn bosses use Mind Burn or Searing Flames and it's been shown that elites can change when a boss is in a mission and explorable, see Defiant Ancient Sseer for an example. — Gares 08:10, 17 November 2006 (CST)

Since there is a discrepancy, here is the SoCs for him in Dasha Vestibule and Resplendent Makuun (respectively): 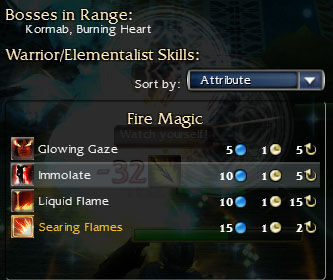 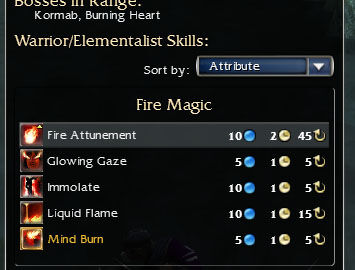 In some cases, this boss is almost impossible to kill. It gets worse if you have a DP. --User:Maxxbrazuca

I agree, this boss (for repllendent makuun) is dang near impossible to kill. I know I've killed him before, but it seems that every time I attempt to kill him, he get more and more difficult, since his mind burn attack deal 167dmg x2, and then there's liquid flame that demolishes caster classes :( I assume that either a interrupt heavy or something like spell breaker or obsidian flesh would help out immensely but...I need to cap those :S --umph