Talk: Last of the Breed

I just completed Centaur Concerns and I am not being offered this quest.Taeliesyn 01:22, 10 December 2006 (CST)

Perhaps beating the Gate of Desolation? In the quest text it states, "We cannot tolerate the noxious air there, but you can." Meaning you probably have to have unlocked the wurms. --Macros† (talk/contribs) 14:28, 12 December 2006 (CST)

Got it only after Battle of Turai's Procession.. can some one confirm?

Thanx for this info.. :) Corsaire

Can someone confirm the requirements? I finished Crossing the Desolation and I've done Centaur Concerns a long time ago. But this quest was not offered. I'll go do Gate of Desolation soon and then check again. --Ab.Er.Rant

I just completed Gate of Desolation and this quest became available when it wasn't before. I updated the Requirements.

I removed the note that stated "Mirza will take all Giant Tusks you have in your inventory, so make sure you don't have more than 3 when completing this quest" because two anons had posted:

Same for me.. get the reward but all tusks remains in my inventory.. same for a guildmate that gave me one tusk.. — Corsaire

Also did not lose any tusks from inventory when I accepted reward. -Keydet96

3 Tusks, Mirza took none. Will upload Screenshot to prove it in a sec...Also, as a side note, if you get to the "Accept Reward" button, drop the Tusks, and hit it, you don't get nothing. This means you can't do a bug/exploit like you can for quests like Raze the Roost. Finally ANet gets something right... >.>

This is why Trivia is a bad thing. Soz. 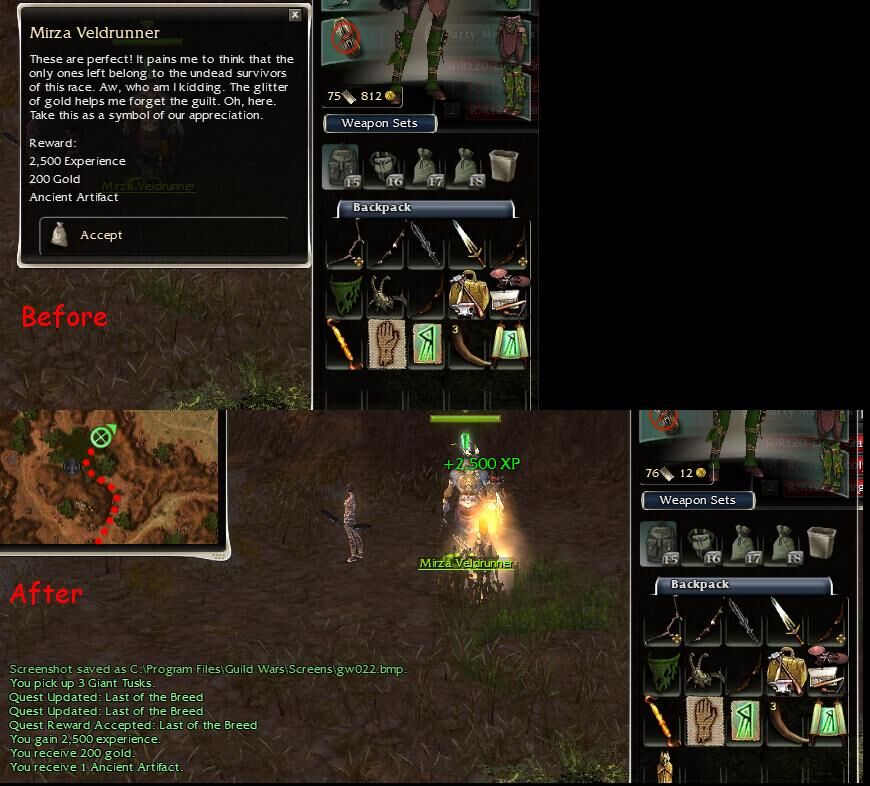 There, proofage. Had 3 Tusks before accepting reward, and three after. None taken by Mirza, and thank him kindly. Damn low drop rates... >.>

After spending many weeks trying to farm those tusks and only getting one, I managed to get the last two after I stopped farming. Then almost immediately, while mapping out the desolation, I ended up getting another six in quick succession. Since I couldn't find a way to separate them I took them all with me to Mirza.... and he nabbed six of the tusks, same as every other person who has brought him six or more. This does seem like a very consistant bug and should probably be reported to A-Net. ~ SotiCoto 87.194.75.37 23:50, 3 October 2007 (UTC)

Yeah, I hate how when you stop looking for something you get a ton of them. Anyway, yeah, report it. Also, to Entropy: You dyed your bags green? --Gimmethegepgun 00:10, 4 October 2007 (UTC)

well he takes the tusks now[]

I realize that the last post was quite a while ago but he does now take the tusks. :( I was so hoping to not have to farm the stupid things again and reusing them to complete the quest on other characters Em Jae 23:36, 29 December 2008 (UTC)

Yes, it was in the update notes.