someone add these picturs to the article please?

Please dye the armor gray and take a profile view of the armor and component screenshots of the back wearing the Chest & Boots then wearing the Hands & Legs. -- Krytan Sentinel 11:25, 4 October 2007 (UTC)

Not a bad reskin of elite noble.

Can't blame them, Noble/Elite Noble are the best mesmer armor in the game imo...

I dyed my boots with a purple dye, and in the preview screen it was very clearly a purple, but once i accepted the dye it appeared to be very pink. Before 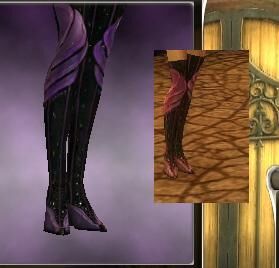