Talk: Message from a Friend 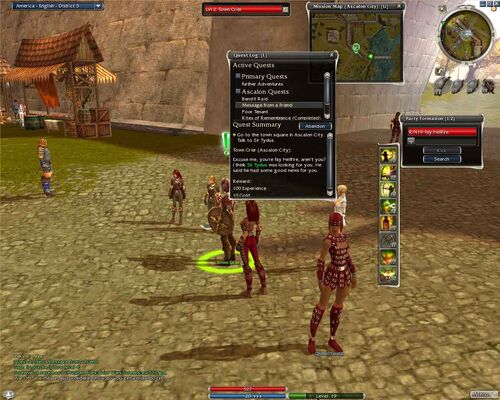 This was not retouched, only compressed to reduce size. The current belief is that once you complete your Primary Profession Test quest, Message from a Friend becomes unavailable forever. As you can see in this screenshot, my character is level 19, has a second profession, and had just added the quest from the Town Cryer, which you can see in the Chat Log and the Quest Log. The Chat Log entry proves that I did not just simply save it in my Quest Log from the start. I don't know what the specific conditions were that allowed it to be available at this point, but all I can say is that I had completed all of my Ranger and Necromancer quests, as well as just took the reward for A Second Profession quest. I think this reasonably proves that it does not disappear forever after completing your Profession Test. RoseOfKali

Oh, and this may matter: I never took War Preparations. RoseOfKali

I just took MFAF, abandoned it, took War Prep, and accepted that reward. I can no longer get MFAF from the Town Crier. --

Yes, that is the common occurrence. Mine is an exception, also read WHEN I was able to get it back, I don't know what exactly triggered this, but I'm just saying that it's somehow POSSIBLE to get it back still. I also never took War Preparations, I started with the profession test. RoseOfKali