This armor has its own scar. It only responds to Black or Yellow Dye.

Also green dye. All other dyes make it look just like a shade of color

I did updating to the the pictures and text of this. Using the Elementalist Vabbian Armor as a guide, I attributed the source of the picture. It was later removed by editors. What is the rule, and where is it posted, for attributions? Why was this entry edited, and not the Elementalist?

(click to enlarge-duh)
Does anyone else find the leg on the female vabbian just a little bit awkward at this angle? I just felt like pointing it out and stirring up conversation. Because I can...? Anyway, I just thought it looked funny. The End. --Rei 01:27, 26 November 2006 (CST)

I do not really think this is funny. This armor is damn expensive. Besides that - ANet gets increasingly sloppy with armor and hairstyles. It looks flashy and funky, as long as you do not move and look straight at it from the logon screen. Once you start moving or zooming out, you get tons of glitches, and this armor is no exception. I do not like this tendency. --Long 18:30, 30 November 2006 (CST)

Mhm. Didn't mean to state that it was "Ha-Ha" funny - just that it looked 'funny' - awkward. I was about to buy it when I noticed it on a nearby necro and it's becoming quite a pain to buy all these materials and then find out later that the armor looks aweful at a certain angle. --Rei 04:31, 1 December 2006 (CST)

Do not worry, I can follow you. I think we are in the same boat regarding our disappointment in small and really avoidable glitches. :) --Long 05:44, 1 December 2006 (CST)

I don't think it's really that bad looking of a glitch, if even if it is that... Check it out for your self, and take off the skirt, and you'll see looking from that angle. The necro's legs are bent that way to begin with. + the armor isn't "that" expensive. Buy it and look for your self, it looks really nice. I'm much more concerned with the armor on the shoulder doesn't move with the arm, which is very noticeable during dancing, but oh well. --Lania Elderfire 02:43, 27 January 2007 (CST)

Is it just me or does the Vabbian male necro armor look better than FoW male necro? :P I'm with you on this one ;)

that collar is just lawl. thats like a seriously popped collar. — JediRogue

The collar is pretty ridiculous, but its the uniqueness and...ridiculousness of the necromancer armor that makes me like it so much, same with ritualist armor. they've gotta have a few overdone things, i'd buy vabbian necro armor if i had a male necro--DNA 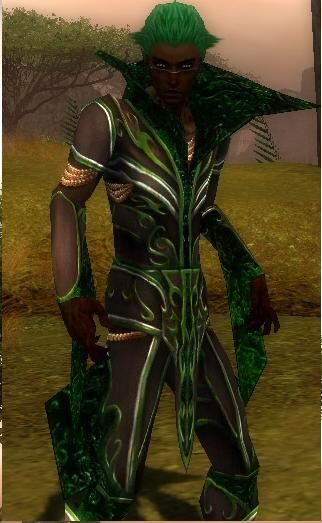 So, I kinda want this armor, but the hideous face (sorry to whoever's character that is) and hair just make me want to hurl when I see the armor. Is it possible that someone could link me to a different picture of the armor with someone in it? Female, obv.Ravien Coromana 11:20, 4 April 2012 (UTC)

Two options: GW Dress-up (or whatever it is called) can show you your character dressed in your favorite armor. Or you could try GWW. Arnout aka The Emperors Angel 11:00, 3 April 2012 (UTC)

If you're talking about the female... Tssk, don't you diss Rose and her sperm boots! --

Rose is great in taking photos, just the "ones" that's not done as the guide shows, is what's to be replaced aka the face by it's self. Btw, Argos is great in finding the location of the gwdressup or just use google for that. :-P . If you want to try at screenshots of these images, feel free to use the gwdressup to do so. Can link you to the guide of what to do, etc. Ariyen 12:20, 4 April 2012 (UTC)