When was this fragile description added? When I got my nesting material 2 days ago, there was no note and I had no problem dropping it (for moa egg/nesting materials interaction experimentation, heh)--Snograt

To my knowledge, nothing in Guild Wars has ever worked like that. You don't drop inventory/quest items on the floor in a neat little pile and see if they interact. The game just doesn't work that way. There's always a prompt, or something to click on, or someone to talk to.--Ninjatek 08:06, 30 August 2007 (CDT)

Confirmed, you cannot put the nesting material into storage now.

Absolutely sucks, was farming wings on my 55 got my material after about 45 mins work and BAM, can't give it to my warrior, now I have to farm them all again. Very annoying.Lyra Valo

i tried countless times but she wouldnt spawn

Ive heard many people talking about how this goes with the (hardened?) moa egg to get a new minipetonce gwen is out. Is there any factual basis for this? Or are people just assuming that they must be connected because they appeared at the same time?

it's the same icon that is used for the Mehkunnah Plant Sample. Accordingly, I changed the picutre link. The Name of this icon should maybe changed...hard to say how, as its used once for a plant and once as a nisting material^^ — 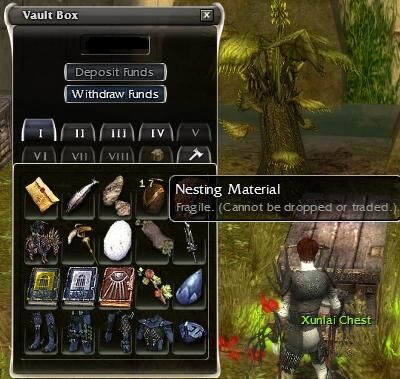