Meh, as you can see I didn't really think about what I was doing and assumed this was an elite. I'll change the image tomorrow if it turns out to be a normal skill.

I'm surprised no one else has yet commented on the awesomeness of this. Could be gold for Rangers too. I wonder how it interacts with Expertise. Arshay Duskbrow 13:53, 27 September 2006 (CDT)

OMG I've seen the Scythes of chaos (I think) use this but i never knew it was this good! If only the stupid maps worked in the demon lands it would be so much more helpful. and does this boss by chance stay off by himself? Alucard pwns all 15:14, 15 November 2006 (CST)

Both are elites. --Theeth

Use it with Lyssa's Assault for energy management in an attack skill heavy build.

Use Volley instead of Barrage, less arrows, but really, do you ever fire the max arrows for Barrage? ZanderArch 20:15, 12 January 2008 (UTC)

Also the wind prayers attributes kind of nudges aside the possibly for this in a decent build compared to the other dervish frontlines we already have. M s4 17:44, 6 May 2007 (CDT)E

I dunno, there's a few good Wind Prayers skills out there that would work well, I think. Dwayna's Touch is a good self-heal in that line, for example, and Pious Restoration is like a Signet of Pious Light for the Wind line (plus hex removal). And being able to spam Lyssa's Assault helps energy a bunch (spamming some of the life-gain attacks would be good too). Combine that with Whirling Charge, and you've got a 25% IAS, 25% cheaper attacks, 25% faster recharge, and 25% increased move speed. That's a total of 100% in benefits! That alone is worth making a build around.
Hmm, I need to get my Dervish moving along in the game... I'm starting to like what I'm saying. --

Problem with that is....Dervish have 70 armor. Some nice powerful self heals I agree, but with no defensive skills you will spend all of your time healing yourself, if you don't you will simply be a low damage assassin. --DEATHWING 11:15, 21 May 2007 (CDT)

You guys need to either A: stop puging, B: give your hero monks a decent build, or C: learn how to play a derv. My derv uses no selfheals and I've henched just about everything. I hit margonites and some torment creatures for 100+dmg often. As for the skill, it really needs a 1/4 casttime. The main prob is that most derv attack skills already recharge quick as it is, so this skill doesn't really do much. P A R A S I T I C 04:55, 24 May 2007 (CDT)

If you are running a build with no self-defense, why not use an assassin? Assassins have higher dps, especially against higher level enemies. --DEATHWING 22:53, 1 June 2007 (CDT)

True, ZV is better if you're attacking a lot... the energy gain is insane (use it on a Assassin, you can't spend the energy fast enough). But this has its uses as well, I think. If you're not attacking as much, maybe just spamming high-cost attacks, then this is great. And you retain your energy regen for spells and whatnot as well. ZV = better energy, Onslaught = better for spamming (the 25% faster recharge is the important part here). --

Zealous Vow is for E-Management only. But all spammable high-damage scythe-attacks cost 5E anyway. Onslaught on the other hand shortens the recharge, increasing the armor-ignoring skill damage by 1/3. It's a good elite. A.Saturnus 07:30, 20 September 2007 (CDT)

I personally wouldnt use this, but I dont know about it really, its never been one that ive used.. --

"When used in conjunction with a ranger's Expertise attribute, it will only deduct the additional 25% energy after the ranger's Expertise is applied." Correct me if I'm wrong, but it shouldn't matter, right? The two stack multiplicatively, so the order they're executed won't affect the end result. Example: you have 10 expertise (40% reduction) and this on. You use a 10-energy skill. If Onslaught comes first, it's (.25*10)*.4= 1 energy. If Expertise comes first, it's (.4*10) *.25= 1 energy. Is there some effect that changes this so I'm wrong? Always the possibility that I'm going crazy.--Mafaraxas 18:17, 6 June 2007 (CDT)

THE FACE OF TERROR 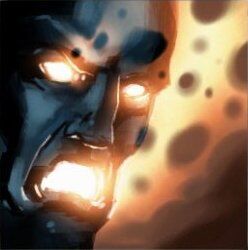 Badly enough to come out of his eyes.

Those are ROCKS, guys. It's the classic "my attack is so UBAR PWNZ that it breaks the ground" cliche thing.

like whirling charge without the clause.. maybe its elite because they can be stacked? i would have liked a buff to the existing functionality.... Roland Cyerni 04:14, 8 August 2008 (UTC)

Ya, that would have been better. Since this is basically the same as Whirling Charge, it should be buffed to 33% for both IAS and IMS (or at least IAS). Then, you can combine it with Harrier's Grasp and a decent stance like Harrier's Haste, Serpent's Quickness, Unseen Fury, Shadow of Haste, Shadow Walk, or Conviction. Right now, there isn't really much reason to take this over Heart of Fury. ــѕт.мıкε 15:55, 8 August 2008 (UTC)

The elite scythe attacks are very powerful so I think we won't see much use of this, especially not since it's not really maintainable and the only class that might want to use it (A/) already got their buffed Way of the Assassin. In it's old state it could be useful for spamming certain attack skills due to the quickened recharge. I agree that this isn't very useful as it is and that they should've buffed the previous version 62.194.247.7 22:13, 10 August 2008 (UTC)

Although somewhat redundant, I wouldn't mind taking this+Whirling Charge on a CritScythe Sin for maintainable IAS/IMS and 33% IAS/IMS for about 5 out of 20 seconds. This skill should probably get another buff, though, because it isn't much better than Whirling Charge. ــѕт.мıкε 22:33, 10 August 2008 (UTC)

You mean 31%? Cause they stack multiplicatively.

Not likely, no warrior is going to expend their elite slot to have a strippable 10en ench when they could have Enraging Charge+Flail which not only improves speed, but aids adren gain leaving their elite free to take something like Dslash, Cleave, Eviscerate etc etc BeeD 08:59, 2 September 2008 (UTC)

Never really understood why you would take frenzy and rush over EC and Flail. Sure, flail has the downside of the 33% reduced speed and EC has a longer recharge, but wouldn't the additional benefits outweigh that? --BeeD 10:01, 3 September 2008 (UTC)

If you practice cancelling Frenzy with Rush, you'll basically have constant IAS and IMS without any downside. Flail is mostly used with Hammer Warriors because they KD their opponents so they aren't going to move, but they usually take Enraging Charge AND Rush. >.> ــѕт.мıкε 11:08, 3 September 2008 (UTC)

This skill was much better pre-"update", & should've been buffed while keeping it in line with its old, unique effects, instead of making it a near-dupe of Whirling Charge. I had a fun build with this & Whirling Charge, 25% buff to everything important to a melee character. - insidious420 21:51, 15 October 2008 (UTC)

They just should have made it maintainable. For example, by reducing the recharge. It was a fun skill before, although somewhat inferior to other elites. Now it's boring and inferior. A.Saturnus 13:25, 19 November 2008 (UTC)

Also needs 33% IAS, tbh. Something like Rampage As One, but without the pet clause, the energy cost or unstrippability. Tbh, it's worse than Heart of Fury for IAS atm, but if they buff it, Critscythes will become popular again, which might not be good. =/ ــѕт.мıкε 22:00, 19 November 2008 (UTC)

It's funny, because Chilling Wisp still pack a shitload of damage anyway. -_- If this was in Mysticism it might get used.

It would make sense if it would make your attack skills recharge 25% faster as well. That way it rly would be an all-round skill for any melee. LegendaryWalter 01:23, 17 December 2008 (UTC)

I don't get all this complaining about it. I been using this all week now and Lovin' it. Purpose aside, I'm a twitch fiend and I'm lovin it just the way it is. And this is coming from one of the loudest Groaners out there anytime something seems gimped or Nerfed. Besides ...I just switch to Echo or Flourish when I really feel it's necessary to spam the same attack skill over and over. And let's not underestimate the simple advantage of having access to an IAS enchant in Wind Prayers when talking about the Diversity of all other Primary professions. --ilr