I explored the gazebo before undertaking this quest. It was automatically marked as complete. When passing by the gazebo later, I noticed that there were Kurzicks loitering. I did not need to kill them to receive the quest reward. Might all of the checkpoints be able to be explored before taking the quest, making the number of fights with Kurzicks nil? -- Dashface

This is the case. My first visit to Mount Qinkai I immediately went right and traced a counterclockwise path around the zone. I stopped by the last few points to complete Charting the Jade Sea and killed some naga in my way to complete More Cowbell and, having come full circle, talked to Aerios. When I checked the quest log to see where I had to go the quest was already marked as complete. --DaveK, 18:35, 9 July 2006 (GMT)

What requirements must I fulfill to be able to take this quest? I have not yet completed the Sunjiang District mission and the Scoutmaster outside Breaker Hollow does not offer the quest to me. Can someone else confirm this, or otherwise tell me what I am doing wrong? -- Quizer 18:14, 13 February 2007 (CST)

I did this quest, not knowing you had to walk back to him in order to complete it. When I came back later to him he wanted to give me the quest again and then would not give me the reward when I had previously been to each place. It would have been nice to know that it refreshes if you zone or get booted for that matter. Morgan Fairweather 19:46, 11 June 2007 (CDT) 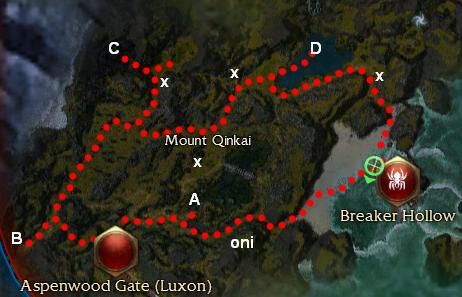 Does this work for a FFF sorta like the Securing Echovald Forest does for the kurzicks???

There is a way of doing FFF with this quest and herohench that takes between 2 and 3 minutes per run. I made a map for it, but don't have access to it right now. As soon as I can get hold of the map I'll post an article for it here (and correct other articles referring to the arena version {3-4 minutes} as fastest where necessary). Note however that it is a bit more complicated and requires timed re-flagging of heroes to work within the time limit. SotiCoto 16:34, 1 November 2007 (UTC)

Man i really wanna learn how to do this. If its anything like Lutgardis FFF its probably faster than doing 'The Jade Arena'--Fear Me I'm Fuzzy 20:34, 1 January 2008 (UTC)

Hello. I realise there are a few ways to farm Luxon Faction, however it seems to me that the methods suggested on this Wiki involve a lot of actual killing as opposed to the famous Kurzick HFFF where you run a few heroes around the place. The method I use (using this quest) is one that an old guildie of mine came up with and I have used it ever since. It is very much like the Kurzick HFFF method where you send your heroes off to do a bit of running using flags, then a little over 1 min 40 seconds later, you take a reward. You'll notice I say over 1 min 40 seconds - yes, it is slightly longer than Kurzick HFFF.

Like the Kurzick HFFF, I charge people 100g per run and make 11,250 gold every 30 minutes doing the run. It's very simple, there is no killing or flashy builds involved, and I can earn my money and faction easily as well as working on my title. I know many find this kind of thing boring, but I thought I would offer the information anyway. If you would like to read more, I have made a step by step guide on my website and my boyfriend made a Texmod to go with it. You can find them both explained very well here.

As a tip, I would suggest you take someone along with you the first few times while you are getting your timings right for moving the flags. Send your friend off to die before you start so that he/she can tell you when your heroes have reached their destination. It helped me to speed my timings up quite a lot doing that and now I can easily earn 10k Luxon Faction (as well as my 11,250g) every 30 minutes! Enjoy :) --90.193.106.125 10:21, 29 September 2008 (UTC)

I just did this quest, and the locations seem to have changed. The first locations is the one that used to be the second. the second it just outside the cave, the third and fourth are on opposite sides of the lake. This is going to be a pain for the FFF guide writers, but there you go. 3:55 4 January, 2009.