I don't think we ever reached a final decision, though I seem to recall most favoring just the profession. Though this could be just my desired recollection because I wanted that. :) --Karlos 23:29, 5 Oct 2005 (EST)

Can anyone get up a map on where the "Peak" is for the wolves? Third

I have not tried to run to Granite Citadel, but exiting from Granite Citadel, I can verify that things have changed. The large patrol has been moved back (to near the fork that takes to Grenth's Footprint), and these lackeys are now there (and they march forward). 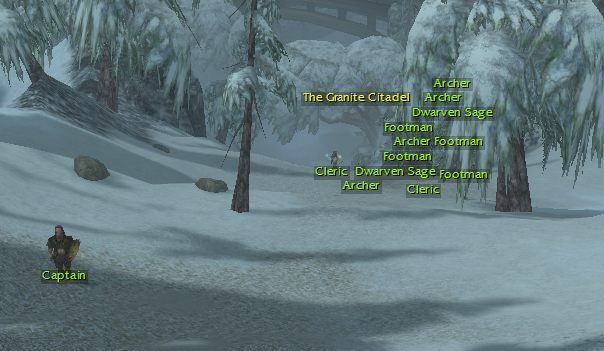 From what I can tell, repeated exits from Granite Citadel cause these dwarves to disappear. What gives?

It's a random spawn. Most of the time there will be a large group of Stone Summit outside but sometimes that group of Deldrimor Dwarves will be there instead. It's funny as hell to watch the group's activity through the area, they go up a little way from their spawn to the first enemy group where the captain breaks away from the main group and the rest of the group just stand and watch him. He runs straight for the enemies alone, getting comically knocked down by Water Trident on the approach. He often doesn't even make it to melee range before death. His group don't seem to care about losing their captain as they just continue to stand there doing nothing xD. — Hyperion` // talk 14:09, 10 August 2007 (CDT)

If anyone wishes to vanquish this, I strongly recommend entering the area starting at the Granite Citadel. I just failed at 98% completion on the last group of stone summit mixed with ice golems, and they are way up near the Citadel so if you can't wipe them you will know straight away instead of after 50 minutes. TrinityX 19:41, 7 July 2009 (UTC)

i dont thnik anyone else had trouble with this but ill add it just in case i vq'd up untill 201, and i had missed 3 patrolling units , they were on the long route from east to north (near the k in in pearhead peaK on the map which i hadnt encounterd before , vqed at 211 artex 1-19-2010