it might work on foe spirits it doesnt specify

It should, just like all the other ones that count on a spirit within earshot (unless they specifically say ally) --Gimmethegepgun 21:42, 2 August 2007 (CDT)

then this might find use in RA against the incredible number of Spirit Spammers you see there daily! Majnore, 09:25, 4 August 2007 (CDT)

This skill is just another one of those skills that are not general use and will only find skill bars in heavilly speciallized roles. MacD

Nice addition to any PBAoE spikers against Rits?

this skill seems to be stronger used against ritualists than using it as the ritualist himself...Majnore, 06:58, 5 August 2007 (CDT)

The whole point of the skill, so Izzy says, was to be a partial counter to spirits. And considering the amount of health stolen, 4-7 spells will remove them from the map depending on spirit. Which is kinda weak, as you need to be in earshot (and therefore, within range of even the attack spirits) and it could backfire. I can't think of ANY Restoration Rit that would want to bring it because it could so easily backfire. Could possibly be combined with Bloodsong. --Kale Ironfist 10:52, 5 August 2007 (CDT)

in the end this skill seems kinda useless, but I bet theres gonna be at least one build that uses this effectively, theres always a use for every skill =) Majnore, 14:50, 5 August 2007 (CDT)

A D/Rt in HA charged with spirit removal might use this. But without a health steal buff, it doesn't sound worth the skill slot. Just speculation. --Mooseyfate 08:52, 7 August 2007 (CDT)

The Bound Spirits Guild is going to complain with the manager.

about a D/Rt, rather like a Elementalist or Necromancer or sumthing like that, a class that specialized more in spells than Dervish isnt really hard to find is it? Majnore, 14:15, 8 August 2007 (CDT)

Useful to get rid of spirits, but for what other use?

At 16 Restoration (which I always have), you can combine this with Ghostmirror Light and Life.

The net result would be: Heal a friend for 95 Heal yourself for 148 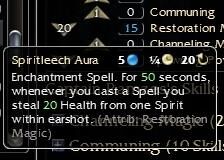 It would appear that when you cast a spell under the effect of this enchantment that you steal health from a spirit.

Skill either has the values switched or Wiki text is wrong. From what an earlier poster said (Supposed to be a small counter to spirit spamming), looks to be former case.

In game, the health steal is listed as a ton higher than it says on the wiki, 44 Health steal and 18 duration at 13 resto, indicating the numbers have been switched in-game. Was there a skill balance/update thing I don't remember on this?--A Child Of Midnight 21:49, 18 February 2008 (UTC) 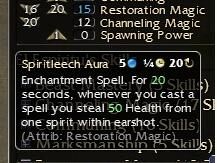 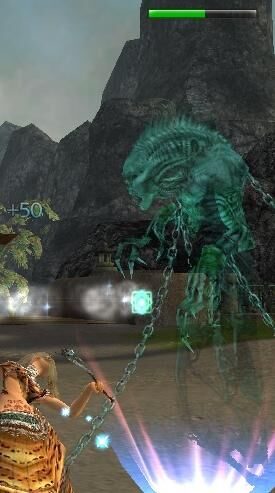 Does it really? That would be awesome. Double lifesteal bloodsong/vampirism.--

What? Wouldn't both of them get the additional lifesteal?--

He said every spirit is like Vampirism. Every spirit now heals the Rit? News to me...

Use in conjunction to new signet of binding as well as spirits in Duncan's for a 2 minute kill*! *No effort needed Slypher the executive director 01:46, 22 June 2009 (UTC)

Should it be noted that this skill does not cause an "effect" monitor to appear on your screen?--Ikimono"My beard is thick."

Kinda depends... Does the effect "follow you arround" or does it only affect the spirits cast within earshot of where it's cast?--

It's a one-time effect, much like Rodgort's Invocation (except that causes Burning for 1..3 sec rather than life steal) :P ---

just checking, this stacks works with shadowsong in addition to the other effect on hit, but no damage, spirits listed on the main page? Githyan 12:17, 13 July 2011 (UTC)

Yes, all attacking spirits will gain the lifesteal from this skill as an additional effect of the attack. So any spirit that doesn't do damage with its attacks will gain the benefit with no drawback. I think Vampirism, Bloodsong, Wanderlust (those 3 on the page), and Shadowsong (not on the page) are the only ones that fit that description. —Dr Ishmael

yeah, thanks, thats what i thought, i waas just checking because i thought it was odd that shadowsong wasnt mentioned. Githyan 17:31, 13 July 2011 (UTC)