Ok, I did it. Disabling 8 guard posts award the Expert Reward.

Anybody else die in a nanosecond after accidentally alerting the seige attacks? I think people ought to be warned a little better than "do not approach the garrison at the centre of the map." I don't know if what happened to me was normal, cuz every single member of the team, includng all of the sunspear died pretty much instantly. Up until that point at which I apparently aggroed the Garrison, I managed to kill off the guard posts well within the time constraints. If this is what happens to everybody once the seige attacks begin, than it ought to be said that "alerting the Garrison (indicated by the red door symbol near the centre of the map), will commonly result in death for the entire party within seconds, and consequently, mission failure." --Pneuma 9000 17:10, 17 November 2006 (CST)

Happened to me just now. I think what happens is that the garison launches a siege attack against each party member in range, so most often that's siege attacks at once, for 42 damage or so each. It's probably a bug, because I can't imagine they really wanted walking into the center of the map to be instantly fatal. Best to mention it still. --Khoross 09:06, 18 November 2006 (CST)

I don't understand why Dr Ishmael reverted my edit about being able to complete the mission by just running it. It might help people who want to get to end-game get there faster. I see absolutely no reason to delete that note. If someone disagrees, please state why here or on my talk page.

o my god! the death isnt technically "instant" but it hits well over 12 times per second.id love to see what happen when you send in someone with Mark of Protection--Coloneh RIP

If the timer on a guard post expires, does that trigger the insta-death siege attack? If so, maybe a special note should be made, especially for those of us trying to achieve the Survivor title.

No, if a guard post timer expires, it calls in a normal, single siege attack, not the insta-death multiple siege attack you get from going too close to the garrison. —Dr Ishmael

Well, after being annihlated several times in a row by the Siege Attacks (damnably long range) I can say the following:

Mark of Protection would probably work just fine, though I've yet to test it. If the damage were higher, Spirit Bond would also work...unfortunately, each attack only does about 7.5% of your max Health (35 dmg), and armor doesn't seem to affect it either. Another useful trick would be to take a Rit with Lively Was Naomei or Restoration. That way, your party can still (sort of) survive after being wiped, as long as you have one or more Sunspears still alive.

Just ran this mission today and accidently ran into range of the garrison. Party got hit by a few siege attacks but was able to run away safely: Veeeee 17:26, 30 June 2007 (CDT)

Maybe the dynamics of the siege changed, but recently I tried this mission and got "killed" by the siege on the first try with a survivor. I moved out of the way yet the whole party was wiped out at the same time without actually taking damage, the bars just started to drop and all party members died at the same time without ever seeing a red number. Fortunately, it didn't count as a death, as I don't think I could have handled that in a pacific way :P. —The preceding unsigned comment was added by 190.198.5.82 (contribs) 03:40, 20 February 2008.

The gate to Dajkah Inlet was closed while I did the mission tonight, so it's no longer possible to accidentally zone in. I can't verify the existance of an open gate before, as I didn't check on previous mission attempts. -- Gordon Ecker 06:55, 21 November 2006 (CST)

I think it worth mentioning that they love to wand enemy. Considering Kournan Bowman have Whirling Defense and use it a lot sometimes it results in amasing amount of damage dealt to your party melee classes.

Oh, yes, I remember it well.. me, a Dervish, mashing on a Kournan Bowman, him activating WD and me seeing Whirling Defense x78 on my damage monitor within 5 seconds, followed by ~ 10 blue 60's above my head from the Evacuees' OoH. Good times.

Just make sure you have a Minion Master and a couple of Barrage Rangers in your party. Fun. DeepSearch 06:36, 5 December 2006 (CST)

I dont know how to do it in the wiki, but could someone add a page that fowards you here in case you mispell cemetery as cemetAry? --Zorbonkingofpants 22:36, 17 December 2006 (CST)

Will do. In future, throw the following code on a blank page: #REDIRECT [[Venta Cemetery (Mission)]] --Armond Warblade

Do any bosses spawn during the mission? If so which ones and with what elites?--Devils Apprentice 12:31, 2 January 2007 (CST)

It's possible that there may be one in the garrison at the middle of the map, but it's essentially impossible to get there because of the insta-death siege. Barring that, there are no bosses in this mission. —Dr Ishmael

Did any one try to enter it with shadow form or somthing of the sort?

That means for 10 seconds you'll be gaining godly amounts of health.

You also need to have at least one of the evacuees with you, they got stuck on a rock early on for me and I thought 'great, they can't die', and had to go back for them for the cutscene to be able to be activated. --Leandriell Illaran 08:54, 17 June 2007 (CDT)

It is awfully hard to run this mission because you need KOSS WITH YOU! Margrid won't negotiate unless u have Koss. The only way I was able to do it was by bonding Koss, having Dunkoro (my bonder) place recall on me...all in all, it was hard work. So why did someone say the note about a runner being easily able to do this? Marin Bloodbane (Talk) 08:19, 5 May 2007 (CDT)

I just did this mission and in the cutscene at the end one random Kournan dude starting shooting another one, possibly a kournan rebellion over wanting to be higher then level 16 so they can't be plowed through so easilly?--Gigathrash 03:44, 4 July 2007 (CDT) 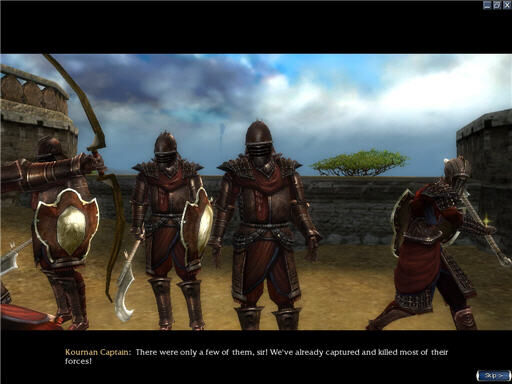 I thought it was intentional. Until I did this mish a second time for masters.

Yeah, I have a cool party[]

Well, I was doing this mission and when I finished it, i returned to Kamadan with a party of 5 players! (max players in a party in Kamadan are 4), I stared at it confused and I noticed that I had my three heroes and P3 Sogolon [Motivation Henchman] (plus me, 5), I think it was because i had him in my party while doing the mission. I got a screenshot of it, if you need it, just reply.

The same thing just happend to me, I also have a screenie if it requires confirmation...Enkil

It has been confirmed, any 8-man party miss that dumps you into Kamadan can do it. You can have up to 8 people if you take the 4 Kamadan henchies and your heroes.

Has anyone tried to use the extra people in kamdan to vanquish? Actually tried 2day and u can use the extra henchies to vanquish even though its not really needed!!! 23:01, 21 February 2008 (UTC)

I was just playing on my sin with critical defense, and I realized, after I swapped it out for disarm trap, that it could maybe block the garrison's seige attack. What does wiki think? Draven Deadlesser 20:50, 17 March 2009 (UTC)

The garrison's siege attack cannot be blocked, it is basically like a Trebuchet or Ballista.