Two things: First, it would be nice to know how to get here as a Canthan - (do we need a quest, or can we just run there), and rephrasing the "Cannot get here without doing the quest" if thats true. Second, putting in a link to the Local Quarter would be helpful to people who don't know much about the area. --The Uglymancer 8:37, 27 May 2006 (PST) Well, I figured I shouldn't be lazy, and added the link myself. I'd still like to know how Canthans get there, and get that added to the section. --The Uglymancer 11:22, 27 May 2006 (PST)

August 25, 2006: Finishing all 13 factions missions is not a requirement to get your Canthan character into Vizunah Square (Foreign District). My assassin walked into Vizunah (Foreign) today and he's only as far as Unwaking Waters. I don't know what the requirement is to unlock Vizunah (Foreign), but it's not all 13 missions. I did a few tests: First, I tried walking into Vizunah (Foreign) with my Canthan monk after adding Vizunah (Local) to my map.... The gate was shut. Then, I tried it a second time after completing the Chaos in Kryta quest and visiting Lion's Arch.... But the gate was still locked. I have not yet tried walking into Vizunah (Foreign) after completing the actual mission. (The completion of the mission on the Local side MAY unlock the Foreign gate.) However, this is confirmed: You can get your Canthan into Vizunah (Foreign) very early by accompanying a Tyrian character on the Welcome to Cantha quest. My Tyrian elementalist got my Canthan warrior into Vizunah (Foreign) and my warrior has not completed any missions other than Minister Cho's Estate and Zen Daijun, nor has he completed Chaos in Kryta. So, unless NCSoft changes it, if your assassin is having a difficult time finding a group in Local, you may do that Welcome to Cantha trick and try your luck in Foreign.

Getting there with a Canthan: disagreement over revert by Aberrant80[]

As a Canthan character, you do -not- need to have done Nahpui Quarter in order to gain access to Vizunah Square (Foreign Quarter). You may gain entrance merely by tagging along with a Foreign Character doing the quest "Welcome to Cantha'. I have done this several times (most of my toons have access to both sides, and have since arriving on the mainland). To say that you can -only- get there by having done Nahpui Quarter can't be "more accurate", as it is simply not true. However, since policy is to note revert a revert, I'm taking this to the talk page. Sorry about taking so long to bring this up...my wife has been in and out of the hospital for the last month, and my wiki editing time has been very limited, so I only now noticed this. ScionOfErixalimar 12:42, 13 July 2007 (CDT)

If someone else can support this, I have no problems with removing that requirement. Just a question though, have you done this recently? --Ab.Er.Rant

Well, I don't have any Canthans who haven't done Nahpui Quarter, but my recollection is as Scion's. In fact, several of the foreigners he tagged along with were mine. My spouse's account has a local character who hasn't gone that far yet, so we can test it and report back. Auntmousie 00:10, 19 July 2007 (CDT)

I know that you used to be able to get there by sticking with a foreign toon, but I'm pretty sure that it was fixed in an update --Gimmethegepgun 00:23, 19 July 2007 (CDT)

When was this "update"? Because I'm pretty sure I was able to ferry a friend's Canthan character to FQ last week. His char hadn't even completed LQ Vizunah either. Amagawd 01:02, 19 July 2007 (CDT)

And I quote: "...but I'm pretty sure..." "pretty sure" generally means that one is not completely certain, but is, in memory, rather inclined towards the subject matter --Gimmethegepgun 02:26, 19 July 2007 (CDT)

One caveat, this is from memory, for this to work (a "foreigner" bringing a Canthan-born to FQ prior to completing the NQ mission), doesn't work if the Canthan-born is the party leader (ie, then the portal has a gate blocking entry). Been a long time since did this, so if people are in a testing mood, try playing with this too (ie, see if having a Canthan or non-Canthan in party leader role makes a difference). --Wolfie

I can clearly remember getting one of my Canthan chars to Foreign Quarter by heading through Nahpui, so that at least is solid. I am also "very sure" that it works with Welcome to Cantha too; I can't say how recently, but I have seen folks LFG'ing for peeps that have the quest, so they can get to Foreign Quarter. Just to add my support. 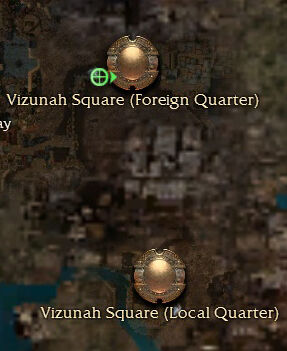 Just tested and confirmed. My Canthan Necro got ferried to Foreign by a friend's NF char. And as you can see, Vizunah hasn't been beaten yet. Amagawd 23:03, 19 July 2007 (CDT)

I think we do. Have to admit, this is the first time I'd ever heard that having Nahpui done opens the gate. Too bad I can't think of a screenie that will prove/disprove it. Auntmousie 23:18, 19 July 2007 (CDT)

Sure you can. This testing proves it. Auntmousie, having Nahpui done does not open the gate on its own. It's just that the previous statement claims that Nahpui must be done first before you can follow a foreign character into the foreign quarter. The screenshot above shows that such is not the case. --Ab.Er.Rant

Sorry, but that's not what I'm saying. I just tested, and have a screenie in which my Canthan Warrior is standing before the open gate to Foreign Quarter, in a party with only heroes and henchies, having never personally been there before. She's a Protector of Cantha, which proves that she's done Nahpui - as well as several missions thereafter, although Nahpui makes sense as the requirement.
What this means is that you can *either* walk there alone after Nahpui, or you can enter with foreigners at any time. Auntmousie 22:44, 20 July 2007 (CDT) 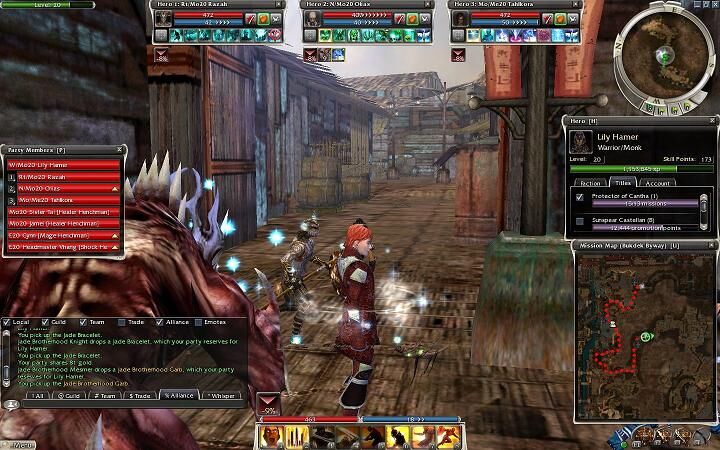 Actually, that only means you can go to there in a party with foreginers or go there after completing the campaign. You'd really need a character who just finished Nahpui to check if he can actually walk into the foreign quarter ;) --Ab.Er.Rant

Came over to this page because my last two Canthans tried to access Foreign today after Mastering the mish, and wasn't able to. If memory serves, my first two WERE able to do it. To help clear a couple things up here though:

Access to both Foreign and Local is possible for characters of the opposite inclination, regardless of who the party leader is, so long as the Welcome to Cantha and Mayhem in the Market quests are used to do so by a proper character in the party. I have done this several times with a few secondary characters both Canthan and Foreign in the last two weeks, and using heroes. As soon as these last two Canthans finish Nahpui today - I will go and retest with them to see if the portal is open and update here accordingly. HanokOdbrook 16:32, 27 April 2008 (UTC)

As a newbie, I notice that there's a bug about a lack of a countdown counter, but the main text doesn't reference any reason for a countdown in the location. Can someone correct that by adding a reason? Or, if the bug only matters during the Mission, should the note be moved to the mission article?--Tennessee Ernie Ford 18:29, 15 February 2009 (UTC)

The bug note is talking about party travelling; When you travel with 2+ players, you'll see a 10 sec countdown until you travel. AB outposts are, for whatever stupid reason ,an exception to this, and this outpost seems to bug it? Meh, never seen it myself. Probably cause I mostly h/h ---