How do you get in here? I am stood by a locked door =( Skuld

Tyrian or Canthan character? My understanding (which may be wrong) is that Tyrian characters go to the Foreign Quarter and Canthan ones go to the Local Quarter. --Rainith 19:11, 13 May 2006 (CDT)

I was told Canthans can go to Foreign after they beat the game, and my warrior found this was so....but i'm standing in fron tof a locked Local gate on my Tyrian that has Master's on the final mission. Not happy. --Dragonaxe 22:57, 18 June 2006 (CDT)

Canthan characters can get both Local and Foreign quarters after mission completion. Tyrian can get Foreign Quarter only. See Talk:Vizunah Square (Mission). --Tinarto

I'm sure it can, but on the thread "Access to Vizunah Local for Tyrian chars", someone said you don't have to beat the game. I have trird with my monk - she beat the game, and success, but failed with my Ranger, which beat the game too, it's a group with 3 Cantha chars and 3 henchies, so I think I need a confirmation to this information. I will ask at Fourm again. --heach 12:45, 4 July 2006 (GMT +8)

As the article states, it has nothing to do with beating the game, you need to be with someone who is doing the quest Mayhem in the Market. --Karlos 13:26, 5 July 2006 (CDT)
yes, but I failed serval times, all I see is Canthan ppl teleport in :/ --heach 21:24, 5 July 2006 (CDT)
Someone should change it in the article. The party leader must be Canthan. I came there with a Canthan party leader, my Tyrian character and 6 henchmen.

Just so that no one ever edits the article again saying so "emphatically" that Tyrian characters "can't" go in. I am uploading this image. 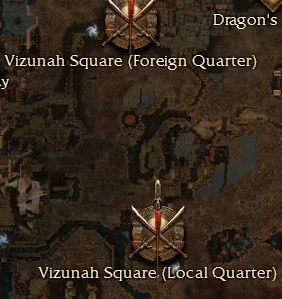 I was party leader (Tyrian) with several other Tyrian characters and a Canthan character with the quest. Half of the Tyrian characters made it in (including me) and half didn't. So the Canthan leader is not a requirement. We have no explanation why some of us made it in and others didn't; there seems to be nothing in common. --Macron 27 July 2006

A Tyrian does NOT need to have completed all 13 missions to enter. At the time I got to the local quarter, I hadn't even made it past Tahnnaki Temple. So while having 13 missions completed may guarantee entry, it is not a requirement. However, I suppose a recent update may have added that as a requirement. --Macron 20 August 2006

I just went into the undercity with myself and a full party of henchies one day, and was surprised to find the local quarter with no gate, just all open to explore as part of the undercity. This was however before I had completed Unwaking Waters, so contradicts claims you need to complete the story first, unless this was indeed more recently changed. --Sunyavadin 05:30, 21 August 2006 (BST)

arrh, I didn't know Zen Daijun and Cho counts, that's why I failed so many time before. Today, I'have tried it twice. First time with 7 henchmen, the door was close. 2nd time, with PuGs, I get in there.

August 25, 2006: After trying four times last month to get my Tyrian ranger into Vizunah Square (Local District) I accomplished it today. I completed Minister Cho's Estate and Zen Daijun per the advice on Wiki, accompanied a Canthan on Mayhem in the Market, and the guard let me inside. Yes, I completed all 13 Factions missions. Then, I tested with my Tyrian monk who is only as far as Unwaking Waters. I completed Cho's and Zen, and the guard let my monk inside. Therefore, finishing all 13 missions is NOT a requirement. (But Mayhem in the Market IS. I tried getting inside without a Canthan character, after completing Cho's and Zen, and it didn't work.) For my third test I chose my Tyrian necro who just completed the To Tahnnakai Temple quest. He hasn't even done the mission. Before I tried to get into Vizunah (Local) I did the Zen mission only. I did not do Cho's. The guard outside Vizunah (Local) still let me in. After that, I did Zen with my Tyrian mesmer. My mesmer has not completed Vizunah (Foreign). He doesn't have it on his map. He hasn't even done the Welcome to Cantha quest. But Zen was all that was required for the guard to let him into Vizunah (Local). For my last test I used my Tyrian elementalist. I tried doing Minister Cho's Estate only, but no, the guard didn't let me in. You can skip Cho's but you can't skip Zen. So, unless NCSoft changes it, I believe a Tyrian character can get into Vizunah Square (Local District) if he completes Zen Daijun and follows a Canthan character on the last part of Mayhem in the Market. You need to complete no missions or quests other than Zen Daijun for this to work. —The preceding unsigned comment was added by [[User:{{{2}}}|{{{2}}}]] ([[User talk:{{{2}}}|talk]] • [[Special:Contributions/{{{2}}}|contribs]]) 11:33, 25 August 2006)Matta2k (CDT).

I tried to enter local quarter with my Tyrian monk and couldn't. He had completed Cho's and Zen Daijun, but not Vizunah Square (Foreign), though he had it on the map; and of course, he was in a party with Canthan players doing the Mayhem quest. Everyone made it inside except him (very frustrating). I'll have to try again now he has completed Vizunah Square (Foreign). —Khudzlin 01:24, 25 March 2007 (CDT)

Ive removed the note about not being able to reach Vizunah Local. I today (9th of June 2007) entered vizunah local with my tyrian born ele, who has finished all factions missions including zen. I have a screenshot to prove it if anyone doubts this. kicks66

The information on the article page (complete Zen Daijun and then Mayhem) is correct and tested with several of my Tyrian chars. ~ Nilles (msg) 01:06, 12 June 2007 (CDT)

I just followed the advice given on the page itself and it was wrong. Since the discussion page has testimony from multiple people who say that you must complete Zen Daijun and Minister Cho's Estate, and my necro has completed factions but not beaten Zen Daijun, I am editing the comment to clarify that it requires more than just a party with Canthan characters doing that quest. —The preceding unsigned comment was added by 68.94.189.113 (contribs) .

Grr, nevermind what was previously written here, I apparently didn't read that Zen Daijun was one of the primary requirements to getting into this outpost. —The preceding unsigned comment was added by 68.94.189.113 (contribs) .

Confirmed, Nightfall characters can do the Mayhem in the Market quest and get in, but only after completing Zen Daijun (if you don't complete it, you're rejected by the guard and have to leave the party/be left behind in the undercity). I didn't read the Zen Daijun part either so I got rejected the first time, after completing Zen Daijun I got in redoing Mayhem in the Market with an unsuspecting vict^H^H^H^Hplayer. Mirar 13:58, 28 August 2007 (CDT)