I'm not sure I like this being a disambig page. I'd rather see it as a summary type article describing all 3 types of coins, where they can be obtained, who collects them, and what the conversions are. I already added the last as notes. Currently you have to go to each coin's article to find that info, and usually you'll be visiting more than one, if you need to know how far you are from getting the item you want, and do the math on conversions, since you always start with copper. And the article names themselves are a pain to type out, I redirected Zcoin here, making it easy to find time and time again, and a perfect place for a quick reference type page. Any thoughts? Objections? RoseOfKali

Agree, how, what and why about the Zaishen Coins can be explained here, explaining how to get them and what collectors want them, instead of keeping this on each seperate page...--

I did some quick computations to compare the value of the 3 types of zoins to each other and to trade values. (See picture.) 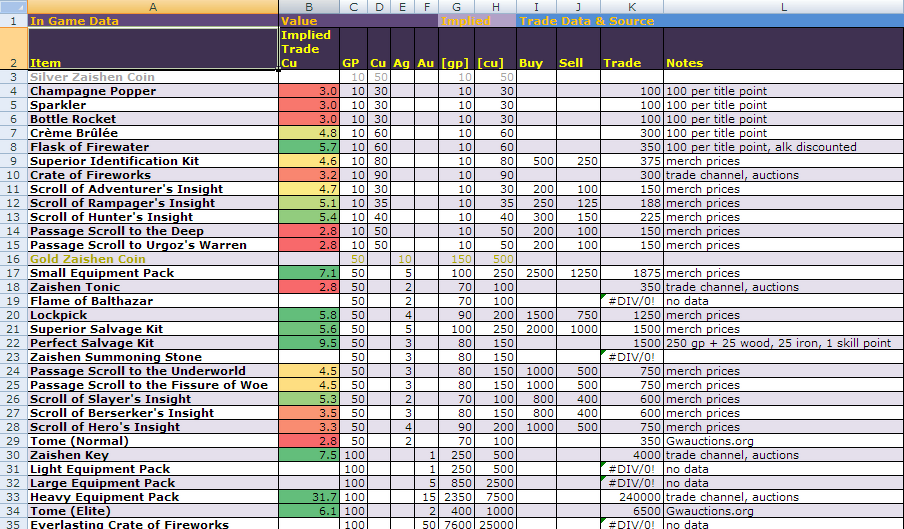 Nicely done! Didn't bother getting into all your computations and conversions, but the end result is: get HEPs until you have one on every character, every mule, and then sell the rest (yeah, right, maybe in a decade ^_^). :P Good to know what's worth it and what isn't. Thanks! RoseOfKali

The value of equipment packs may fall with time, once most of the players who care have what they want. Quizzical 22:43, 4 June 2009 (UTC)

Yes, but it'll be a while before they drop 2/3 of their value. And what's with the DIV/0's? RoseOfKali

Flame of Balthazar is 1k faction. 5k faction = zkey = 4k. FoB = 800g. 1k faction can also be used to unlock a skill, when skill tomes are avg 600g, and skills are 1k from trainer, which again leads to 800g avg, so it seems like a reasonable estimate for something that's never traded (not that I've seen, anyway). RoseOfKali

Really depends on profession. Most people still charge high for Mo/E/N/Rt tomes, Me/A are cheapest at like 200g a piece. But I've only seen in-game, don't shop on sites. RoseOfKali

Why would anyone use this as a shortened version of Zaishen coin? It's such a moronic abbreviation. No other Zaishen anything is shortened like this; everything else is zwhatever (zchest and zkey to name a few). Why would you remove the "c" from zcoin? Have you ever said it out loud? It's ridiculous. It's like calling blinding surge "burge," primal rage "page," or mending touch "mouch;" it's stupidity in word form.

I guess I'm a moron (I suspected as much already; it's nice to have confirmation of same :-). I like short, silly, shrunk pet-names for things in the game. Why use the bi-syllabic, z-coin when a single syllable will do? Why spend 5 letters when 4 will do? (and one wants to reduce before reusing or recycling).
None of which improves upon my favorite, non-Zaishen moronity: Going Postal (for leaving pre-Searing Ascalon). With tongue-in-check and no apologies,   — Tennessee Ernie Ford (TEF) 04:59, 22 June 2009 (UTC)

Zombie bats to you, zombie wombats to me. RoseOfKali

There's a difference between 'pee-rage' and 'prage', though, and I haven't heard prage at all (same goes for Bee-surge).
Zombie wombat.. Zwombat.. Zwembad? ---

I've seen prage and bsurge quite a lot, and I don't even play GvG or HA where they're used most.--

I meant on voice chat :P Felix either misread Page and Burge, or he meant voice chat. For his sake, I hope it was the former :) ---

Never too late to join in the fun :-) I took your point; I don't happen to agree. I like the zound of zoin better than zcoin; it runs more trippingly on the tongue or keyboard IMO. (I hesitate to point out that many might find the initial comment as going beyond giving examples of consistent zaishen alternatives. It contains value-laden terms (not once, but thrice) about a choice made by fellow players and wikians. )   — Tennessee Ernie Ford (TEF) 18:17, 23 June 2009 (UTC)