I completed Rox with a simple trappers team, Dust traps around Salma helped protect her, while it also helped to minimize the damage output of Rox.

For both Nox and Pox i teamed up with a monk and two melee classes. Broad head arrow kept the boss dazed while the mellee damage interupted every single spell. The other 4 proffesions in the party are arbitrary.

The last page of the book resembles The Falls. I would expect that that is the place to find the secret liar. Im gonna check it out. Alleycat! 04:03, 5 September 2008 (UTC)

Also, the loading screen for the tutorial is that of the Maguuma Jungle. Also of interest is his little clue, "stop when it hurts". Check through environmental effects and see if you can find one that should be in a reasonable location. — Powersurge360 04:07, 5 September 2008 (UTC)

Ventari's Refuge is full of golems and they are advertising runs to the secret liar. I think i nailed it.Alleycat! 04:11, 5 September 2008 (UTC)

rox was such a push over compared to the other two >.>

Noooo kidding... That one in Nightfall was monstrous to try to h/h through. In hindsight, it'd probably be better to bring a mesmer hero and lock him as his target. — Powersurge360 07:28, 5 September 2008 (UTC)

How can I not reply to this topic? I've seen very few quotes, but they don't seem particularly GIR like. M.O.X. page may explain the true reference, but [1]. Then again, Zinn... the two n's look a lot like another letter. With that being his "masters" name, I'd almost be surprised if he doesn't have any GIR quotes. --Mooseyfate 06:10, 5 September 2008 (UTC)

GOX is like GIR, not MOX. When asked about what the G is for in both GOX and GIR, he replies with "I don't know". GIR has said randomly that he wants to be a mongoose. GIR's disguise is a dog. Zinn is similar to Zim, in name and stature. The phrase "Is it supposed to be stupid? It's not stupid, it's very advanced" is used in the series and in the end bit of the quest. Frankly, how can it NOT be a reference? — Powersurge360 06:10, 5 September 2008 (UTC)

All sorts of dialog from the Golem User Manual is very reminiscent of Zim as well. Talking about his own greatness/genius/reputation, his secret underground lair, pea-sized intellect, etc. Not proof on it's own, just more support for your claim. --Mooseyfate 13:03, 6 September 2008 (UTC)

Because the Golem User Manual takes you to meet the Image of Zinn in the Hero Tutorial area by Boreal Station which is where you get it? --heurist 12:45, 5 September 2008 (UTC)

Location and route to Zinn's Lair[]

I've uploaded a screenshot of the path and location to the lair through The Falls. Someone with more wiki knowlegde can insert it into the article, if neccessary. Image can be found here: 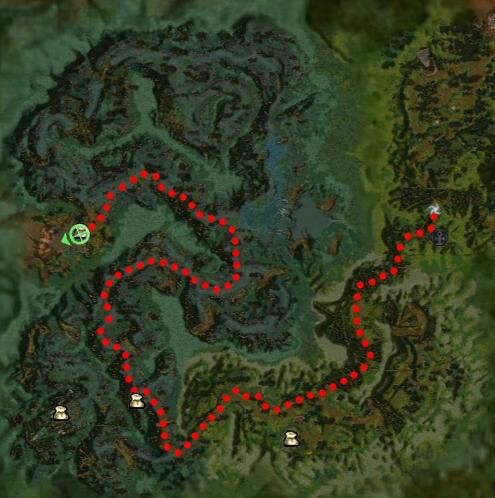 Good plan. They are, after all, separate quests.

Once you are in the Zinn's Lair (underground), there are no more foes if at least one M.O.X. is in your party.

I hereby Confirm that if M.O.X is dead but still in your party you are able to enter the lair ( this may have been a glich though) - Ecofudge -

Confirmed as working, so you can run yourself.--

You must personally have MOX among your heroes in order to initiate the entry into the lair, though - my wife and I went out there together, I had MOX as one of my heroes, she didn't. When we "spoke" with The Falls, I got the option to enter the lair, but she didn't. It still transported the entire party when I accepted, of course. —Dr Ishmael

Golem Sentry: *IN-TRU-DER AL-ERT*
Golem Sentry: *I-DEN-TI-FI-CA-TION VER-I-FIED, A-LARM DIS-A-BLED*
Zinn: Ah, you made it. Good. My intelligence network already informed me of the successful completion of your assignment.
Zinn: I'm terribly relieved. I was horrified about that what might have happened... to my reputation. Come Along. Get your reward. You earned it.
Zinn: Why, look who's here!
G.O.X: *G.O.X. RE-PORT-ING FOR DU-TY*
Players Character: What does the "G" stand for?
G.O.X: *I DO NOT KNOW*
Players Character: Is it supposed to be stupid?
Zinn: G.O.X. isn't stupid! It's very advanced!
G.O.X.: *AD-VAN-CED*
Zinn: One day G.O.X. you will be just like M.O.X. Isn't that right, G.O.X.?
G.O.X.: *JUST LIKE MON-GOOSE*
Zinn: No, no!. Just like M.O.X.
G.O.X.: *JUST LIKE DOG*
Zinn: Oh, never mind.

Need to do quests?[]

doy ou need to do the other quests if you already know where the lair is?--

Well, yeah, because you don't have the crystals. — Abedeus

After quest, should not Zinn want revenge on 'fellow' that tricked him?[]

After defeating what the fellow wanted Zinn to build--the golems, should there not be some quest to get revenge for Zinn for being tricked? GW-Susan 19:07, 15 September 2008 (UTC)

Shh, that's where the next new Hero comes in. No alpha leaks :P

Linsey confirmed that the identity of the "fellow" will be revealed in future quests to come.

We're now a year further and still no idea who the fellow was. :( Gaia

Well, Zinn's Trial is probably the first step to another quest about him.--

When I finished the quests and got the reward last night I took along a couple of low-level heroes to level them up, but neither one gained any XP at all. Has anyone else experienced this? Perrin42 00:23, 18 September 2008 (UTC)

Could be a bug, most quests and missions share XP with Heroes...

What level were your heroes?