Trees are everywhere in this part of Kryta. Forest Minotaurs and swarms of Mergoyle/Bog Skale Icetooth mobs populate the southern part of this region, while Ancient Oakhearts (lv 17) are more prominent in the north. In the northwest area, there are swarms of Inferno Imps. Fog Nightmares rise from the ground all over the map.

Three of the NPCs (Elder Rabne, Galstaff the Light, and Artisan Sivan) of this map are nestled in the southwest corner, in a thorp called Dakutu Village. Accrued items may be sold here if a Caravan Vanquish is the goal. 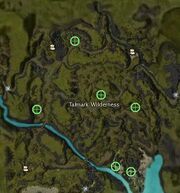 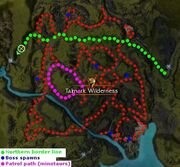