Location: The Falls, southwest of the entrance, next to Dark Oak
Collecting: 5 Tangled Seeds 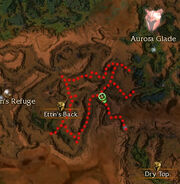 Ettin's Back
Start from Aurora Glade and follow the path. After initial groups of Moss Scarabs, search the path to the south, towards Dry Top, for Thorn Stalkers, usually 15 – 40 all together. Be careful of pop-ups and patrols of drones and stalkers.

Rezone at the Dry Top portal and farm in the other direction. Less than 10 minutes per run.

Bloodstone Fen
12 – 15 Thorn Stalkers at the very beginning and no other enemies until Devourers start appearing. Can be farmed even in Hard Mode with any anti-caster or SoS build.