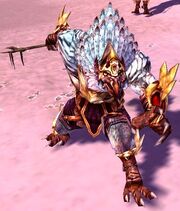 An Avicara Guile, a typical Tengu

Tengu are a class of monster, i.e. a species in the bestiary of Guild Wars.

Tengu are humanoid, intelligent, quick-moving creatures who resemble a mixture of human and bird, with a feathered body and a bird-like head and beak. They are unable to fly, but can hold weapons and items.

The Tyrian Tengu split up into three peoples:

All three groups of Tengu are hostile.

In Cantha, the Tengu are divided into two main tribes, the Sensali and the Angchu. A third, smaller tribe, the Star Tengu, reside in the Nahpui Quarter of Kaineng City. The Sensali and Star tribes are hostile, while the Angchu are allies.

The Canthans tolerate the Angchu but few consider them equal to men. Nonetheless, humans and Angchu jointly celebrate the end of the Tengu Wars. The anniversary of the peace treaty is celebrated by humans as the "Day of the Tengu".

A Tengu henchman named Talon Silverwing can be employed in some Canthan and all Eye of the North locations. He is recognized by Emperor Kisu as one of the individuals instrumental in bringing an end to the Tengu Wars.

Tengu are usually found in mixed groups of melee attackers, ranged attackers and spellcasters. This mixture, combined with their speed, makes them dangerous foes for any profession.

Tengu may drop the following loot (besides gold and various weapons and items):