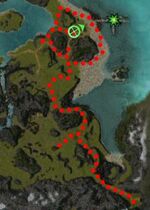 "Jatoro! JATOOOOROOOOO! You there...can you help me? The Crimson Skull have taken my son hostage! I heard they usually sail out of Hanzing Pier, and that is where I last saw him. Please, help me rescue Jatoro."

"Kidnapped? No, I....all right, look. I just want to find my own path, but my mother has already got my entire future planned out for me. Surely a hero like you understands.... I love my mother, but she doesn't want to let me live my own life. So I faked the kidnapping, and I am going to join the pirates in search of adventure. Please give mother this letter. If she loves me, she will understand."

"This letter has opened my eyes. I never realized Jatoro had no desire to be a merchant! Of course I support his decision...even if it means a life of piracy. After all, pirates do pretty well for themselves, I hear. Thank you, <name>!"

This quest is best started from Zen Daijun. It can take quite a long time to complete, and a party of human players is recommended (henchmen parties, even those starting out of Seitung Harbor, can complete it but it is more difficult). If you have to take henchmen, choose those that deal damage at range. Two players should have some re-usable resurrection skill, and all others should bring Resurrection Signet. Even with caution, it is likely some party members will die. A single human player can complete the quest with henchmen, if the player is at level 20 and has the maximum armor,say from Kaineng Center.

When you leave Zen Daijun, head north as the minimap shows. Kill the Afflicted, Bonesnap Turtles and Dragon Lillies along the way, then go to the beach. Follow the beach until you can see the Crimson Skull pirate camp. Carefully pull small groups of Crimson Skull, which can be difficult because often many of the other enemies in the camp will become aggroed. In such a case, immediately run away until some of the pursuers break off to return to camp and only a manageable group is still focused on your party.

Melee fighters shouldn't engage the enemies too close to the main camp to allow easier escape if too many foes become aggroed. It is better to run away and try again than to kill only a few enemies and then die and accumulate death penalty. Nibble away at the enemies; kill a few, retreat, and repeat. Remember to kill healers (Crimson Skull Healer, Crimson Skull Priest) first. When you have cleared the beach, do not attack the camp yet. Go around and draw forces away from the other side of the camp as well. Avoid fighting the boss until he is alone. You may pull a small group with the boss out of the camp, in such case kill the normal pirates first and then focus on the boss.

In order to complete the quest, you must kill every single Crimson Skull in the camp. Only then will Jatoro explain to you that he wants to stay with pirates and give you a letter for his mother. Return to Seitung Harbor and talk to his mother. Have a good laugh about her reply and accept the reward.

Warning: Occasionally a group of Crimson Skull will break away from the main camp and attack Jatoro on the docks. Watch for this because you cannot complete the quest if he dies.