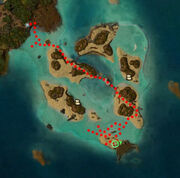 Location of The Cyclone Palace

"[Difficulty: Master] The skale armies are on the run! Now is the time to strike at their heart and remove this threat from our doorstep once and for all. We've heard reports the armies are commanded by a skale leader who is far more intelligent than the rest. In fact, he may have some sort of magical control over them. I paid some corsairs a huge sum to discover the location of this leader. It seems he's taken up residence at the Cyclone Palace in Mehtani Keys. If you can destroy the leader, I'm sure the skale armies will disband."

Accept: "Cut off the head and the body will fall. Yes. An excellent plan!"
Reject: "The Cyclone Palace is at the far end of the Keys. Perhaps they will stay there."

"With the leader of the skale army destroyed, I don't think we'll need to worry about them for a very long time. Well done, <name>! We are forever in your debt."

There are quite a few skales near the Cyclone Palace, however most of these can be easily dispatched by careful pulling. The majority of them are level 4 and are grouped into 3 different mobs. A well-placed Fireball can take out a lot of them at once. The remaining Frigid Skale and the boss are the only relatively difficult part of this quest, (due to large spikes from Ice Spear). But even if you do get wiped out, the Resurrection Shrine is right next to the boss, so they will go down eventually.