"I have a bit of a problem and I wonder, could help me? [sic] Let me introduce myself. I am Turimachus. Yes, that Turimachus, known by many on the Jade Sea as the Dragon Hunter. I've been studying the Dragons of the Jade Sea since the day I could walk. People might think that they're dangerous and bloodthirsty, but I just love the little beauties. And fascinating? You bet! For example, dragons are excellent parents, which contradicts the classical depictions of these magnificent creatures. They are incredibly protective of their eggs, particularly the saltspray varieties that live out in Silent Surf. That's where I could use your help. If you could get me close to a clutch of Saltspray Dragon eggs, perhaps even offer something of a distraction, I'm sure I could gather one using extreme caution. Just meet me outside in Silent Surf and we can get hunting!"

Accept: "I'll see you at the rendezvous point."
Reject: "Find another piece of dragon-bait, friend."

Turimachus: "You go ahead and lead the way, I'll follow you. When we get near the eggs I'll take over. Trust me."

Turimachus: "There's a nice clutch of eggs. Follow me and watch out for those Dragons. They're looking a bit... agitated."

"This egg's one beauty of a specimen! Thank you for all your help... this is definitely the ultimate study aid, eh?" 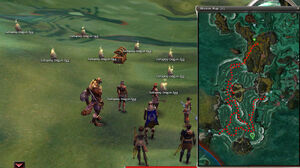 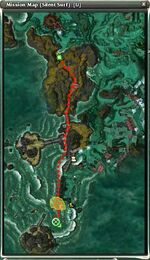 There are several ways to finish this quest. Turimachus will meet you right outside of the Leviathan Pits, but the eggs he desires are at the southern end of Silent Surf. So for a safe approach, you can start in Seafarer's Rest, clear the way south, then work yourself up to the Levithan Pits and bring Turimachus the now safe way back south. Get close to Turimachus and he will start following you. He will be listed as an ally in your party configuration window, so it is easy to watch over his health.

When Turimachus gets close to the quest marker, a patch of Saltspray Dragon Eggs will appear, which will be guarded by a group of five Saltspray Dragons. Turimachus will try to pick up an egg and escape with it back to the Leviathan Pits. Beware, for he will run for the eggs right away, not waiting for you. If he aggros the Dragons, it is very likely that he will be killed very quickly, meaning you failed the quest. The quest ends as a success in one of two cases: All five Saltspray Dragons are dead or Turimachus reaches the Leviathan Pits with his egg. The dragons may spawn a short distance away from the eggs, so it may be possible to sneak in, grab an egg and get away without a fight. Otherwise, Turimachus has only to survive long enough for you to kill the dragons, if he dies after that (i.e. from running into other enemies) you will still have succeeded.

It is recommended that you initate the aggro yourself by running to the side of the location where the Dragons appear, forcing them to focus on your location rather than directly over the eggs. Doing so will center the battle away from Turimachus and his activities, and increase the probability that he will grab an egg and escape.

Another efficient way to deal with the situation is to have a monk hero cast Protective Spirit on Turimachus to protect him from the Saltspray Dragons spike damage.