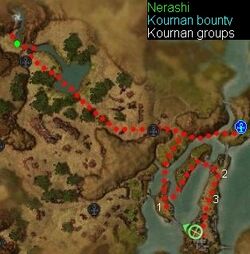 "I have good news and bad news. The good news is that Nerashi found Koss! Unfortunately... he's been taken prisoner by the Kournans. We need to get him back. He had made a deal with a friendly corsair captain, Margrid the Sly, and we need her ship to get our wounded back to Istan. That means we need Koss. Go meet Nerashi in Arkjok Ward and devise a plan for breaking Koss out."

Accept: "Anything for Koss."
Reject: "I've been enjoying the quiet. I'm sure Koss will be fine for a while longer."
When asked about quest: "Nerashi is in Arkjok Ward. You should hurry. We really need to get Koss back."

"Koss and several others are being held in the garrison to the east. Their captor is an arrogant Kournan commander named Kubeh. I am sure if you take out Kubeh's signal scout patrols you'll be able to lure him from his lair to deal with him face-to-face. Follow my directions and you should be able to take them out without alerting the others."

Intermediate Dialogue 2 (after taking out the last scout patrol)

Commander Kubeh: "What's that? A signal scout group just went down! If they weren't dead, I'd kill them myself!"

"Took you long enough. I was getting tired of that Kubeh fellow... about near chewed through my shackles so I could shut him up myself! Things definitely went south at Gandara, didn't they?

So, you've found a place to hole up while I was the guest of these Kournans? Good, good. We're going to see what supplies we can find in this garrison and then pay my corsair friend a visit. I'll meet you back at the command post."

"Nice work rescuing Koss and the other Sunspears. Koss checked with Margrid and she'll have her boat ready for us, but while I was there I heard news of more Sunspear evacuees. We have to rescue them! Talk to me when you're ready to proceed."

Exit the Sunspear Sanctuary to Arkjok Ward and talk to Nerashi directly in front of the exit. She tells you to wipe out the patrols around the gardens (although it's more of a fort). There are three patrols, one on the west side of the island, and two on the north side. Once you kill all three patrols, the doors to the fort open and you can attack Commander Kubeh, who immediately calls for a bombardment. Kubeh is also the first boss you can capture Barrage from in Elona.