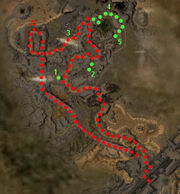 The primary objective is pretty easy: simply follow the path northwards, fighting your way through the devourers, gargoyles and grawl. You will encounter one boss near a closed gate (which you must open with a lever), and another near a skirmish between gargoyles and grawl. When you encounter the Charr boss and his group, you're almost at the end (point A on the map). Watch the cut scene, and then it's a mad-dash back to Captain Calhaan. Do not stop to fight the two devourers you will run into, and definitely do not try to fight the Charr that are pursuing you as there is another group of Charr chasing you on a parallel route that intersects with your route further on. It is enough for one party member to reach the captain. If for some reason you get held up and the enemy forces get too close, someone can try to grab their attention for a few seconds, buying the others some time and probably dying in the process. You have around three and a half minutes to make the run, which you can complete with just over a minute to spare, if you don't stop anywhere. Talking to the captain triggers the second cut scene and the end of the mission.

Kilnn Testibrie appears in front of his tomb in the northeastern part of the second map area (past the first lever). The quickest path to him is to go under the short bridge adjacent to the tarpit (where the grawls and gargoyles are having a brawl), and follow the snaking passage until you see his tomb to the right. Talk to Kilnn to get the bonus objective.

You need to find four pieces of Kilnn Testibrie's armor (all located in the second area):

You can pick them up as you complete the primary objective. First pick up the crest, then go through the narrow ravine to the ruined arena for the cuisse. Go past the fighting grawl and gargoyles (and the boss), over the bridge and to the left to the greaves on a ledge. Finally, backtrack slightly and take the looped track to the pauldron; a boss will be guarding this wreckage. Stay on the loop to encounter Kilnn again, this time to your left. (See the colored dots on the mission map.)

Note that the Charr will move much more quickly than in normal mode. Escaping them may actually present a challenge to the unprepared. Running skills can help greatly, although by simply skipping the cutscene you should have sufficient head start running at normal speed. You can also send your teammates, preferably Henchmen/Heroes, on a suicidal mission against the Charr to gain a few more seconds. Occasionally, a pair of Devourers spawn on the your route back; although they can be easily killed, it can be faster to run around and past them. In addition, the Charr seem to be hostile to the devourers, so leaving them will help forestall the pursuing mob of Charr a bit.

Captain Calhaan: We fear the Charr General Bonfaaz Burntfur is planning a mass raid on the Wall. Head north into enemy territory and find out what that mangy beast has planned.

Ascalon Veteran: It's been awfully quiet around here. No Charr patrols for days.

Ascalon Veteran: I don't think Ascalon could hold back another Charr invasion.

Ascalon Veteran: They're planning something. I know it.

Kilnn Testibrie: In life, I was known as the Champion of Surmia. In death I am but a restless spirit. Please help me. The enchanted armor that sealed my tomb has been stolen. Find it and return it to me, so that I may pass into the Rift.

Kilnn Testibrie: Thank you! I will remember your kindness when we meet again in the Underworld.

<party leader>: The Charr invasion force. Captain Calhaan was right. They've spotted us. Back to the Wall!

Captain Calhaan: You're back. Well done. What news of the Charr?

<party leader>: We found Bonfaaz Burntfur and the Charr army, sir, in a valley to the north. But I'm afraid we were spotted. They come for the Wall as we speak!

Captain Calhaan: There are too many. We'll never hold them back. The Wall is lost. We must fall back. Retreat! Retreat! Regroup at the bunkers just north of Fort Ranik. We can't let the Charr make it to the capital.

"End Of World" In The Great Northern Wall"
Retrieved from "https://guildwiki.fandom.com/wiki/The_Great_Northern_Wall_(mission)?oldid=1607571"
Categories: