The Jade Quarry is a Competitive Mission where a Kurzick team fights a Luxon team in a PvP battle of eight randomly chosen players each in a struggle to gain control of three jade quarries and be the first to return ten slabs of Jade to their base. 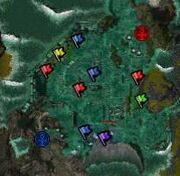 The Jade Quarry is a resource control mission between the Luxons and Kurzicks. Each side fights to be the first to obtain ten slabs of jade from the jade quarries on the map. When a side wrests control of a jade quarry, a NPC jade carrier is spawned who takes Jade to the base. If the carrier is able to reach the center of their side's base, the jade slab is added to the total for that side.

The map is balanced so that neither side has an advantage over the other. There are three quarries. Purple is closest to the Kurzicks, Green is closest to the Luxon, Yellow is equal distance from each side. There are a number of guard posts on the map which may be taken to assist or hinder the passage of players and jade carriers.

Both quarries and guard posts can belong to either side, and change sides when all NPCs for the location have been eliminated. This causes new NPCs for the opposite side to spawn. At the start of play the quarries are unclaimed, and must be taken by a player by standing on the stone platform of the mine. Each quarry has five NPCs; a ranger, two mesmers and two air elementalists. Each guard post can have two to four rangers.

The sides spawn on opposite sides of the map. All players resurrect automatically in the base and receive no death penalty. The base has three one way teleporters, labelled for each quarry. They take you out of the base to a location somewhat closer to their respective quarry.

While the teams are randomly assembled, there are several things you can do to prepare for this mission:

Killing a point's NPCs or killing a jade carrier is your most important priority. In attack, it is best not to attack opposition players unless they are directly impeding your ability to take a point or kill a carrier (such as a monk or ritualist).

It is said that offense is the best form of defense, but there are some things which players can do to impede the opposition in taking points and defend the jade carriers.

Defending a point which is already taken, or defending a jade carrier is the best way to impede and take out opposition players. It can be better to impede a player rather than killing them; taking their energy, or using slowdowns prevents them from contributing in any way to the fight whereas if you killed them you give them full health, energy and a way to easily start over on a new task.