Vision of Glint in Droknar's Forge

"Though many followed Prince Rurik in his quest to secure a better future for the people of Ascalon, there are those who remained behind. Despite the Charr threat, they could not bring themselves to leave the soil on which they had been born. Now, they are in grave danger. Ascalon's great walls and soldiers have withered in Rurik's absence.

An old king dons his armor, heavy with time, to fight a battle he cannot win. It is his will alone that keeps Ascalon alive. Now it is up to you to make sure he too stays alive. Hurry to Frontier Gate!"

Accept: "Dwayna protect him! Balthazar grant him strength and courage! We are on our way!"
Reject: "Adlebern [sic] is not my king..."

"A long time have I fought for Ascalon. First as a soldier blessed by Balthazar, now as its king. Though I have survived one more battle, and I will see another day, it will not make me any more wise... only one day older. I have lost all that a man can lose. All that I have left is this antiquated set of armor and the remains of this tattered kingdom. I thank you for your help today. Rurik would have been very proud of all you have accomplished.

This is a difficult quest for a few reasons:

Walk out the gate and a short distance (through a few Charr groups) to find King Adelbern, one Adelbern's Priest and two Adelbern's Guards rushing towards a group of low-level Charr. While they are no threat, their elimination triggers waves of Armageddon Lords. Each lord will be accompanied by basic Charr and Charr lords. The groups increase in difficulty; at first there will be only one Charr lord, then two, then two including a healer and then three Charr lords. The final group will have two Armageddon Lords together.

Always attempt to intercept the incoming groups well ahead of King Adelbern and always protect Adelbern's Priest. Losing the priest ally will most assuredly put too much pressure on your party's healers. The king's guards are good fighters; they, too, are worth keeping alive.

Carefully target enemies in this order: 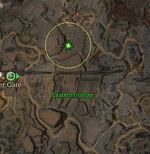