The Price of Steel 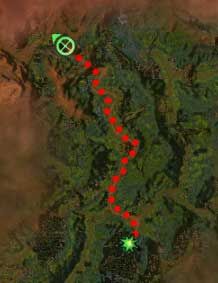 "I have learned recently that a White Mantle patrol entered the forest and has become lost. They were last spotted somewhere in Silverwood. Report to Gareth Quickblade in Quarrel Falls and let him know that there are White Mantle in the woods. Well, what are you waiting for?"

"The White Mantle think they can send patrols into our forests and not pay the price? They'll soon learn the cost of crossing the Shining Blade! I'll have several scouts meet you in Silverwood. They'll lead you to this White Mantle patrol. Wipe out the patrol and bring me their armor when you are done. We should be able to salvage some useable steel from them."

"Follow me. Hurry, before the White Mantle patrol escapes the forest.

Well done. Not only have we destroyed one of their patrols, but this armor should salvage into enough steel to equip many of our scouts."

Head north straight out of Quarrel Falls and then follow the road slightly to the northeast down into a valley. Follow this to its end and you will find Alari Doubleblade. You can then jump back to Quarrel Falls via the map. Walk out the entrance and talk to the Shining Blade Scout you find near there. You can either follow the scout and the two Shining Blade Rangers, though they run off quickly, aggro monsters and die easily, or you can map travel to Bloodstone Fen, which is much easier as the Lost White Mantle Knights are just outside it. Either way you will find them just outside Bloodstone Fen. Kill them all and take the Ruined Armor they drop to Gareth.

Tip: To acquire this quest, you can start from Bloodstone Fen, and purposely die on the cliff just south of Alari Doubleblade, since you will be resurrected at the shrine right next to her.