"That Little Thom, he's a blight on the honor of this unit. We've been out here doin' what no one else will, and he goes and deserts. Where's the honor? Where's the pride? Where's his loyalty to those of us who stuck our necks out to protect his sorry butt? If you see that lowly dog, you tell him that Farrah Cappo can hold a grudge for a long, long time. He'd better sleep light, because if we ever get out of this hole, I'm coming for him, and he's gonna wish he never left us."

"Little Thom is dead? I don't think so. That weasel had a special talent for hiding from danger. The badge you say you found on his body is only further proof it wasn't him. You see, he lost that badge gambling two nights before we crossed the Wall.

At any rate, I appreciate the trouble you went to in looking for him. You know, it pleases me to think he's still alive, running around out there, causing trouble still... Means I still have a chance to be the one to give him his comeuppance. Yeah, I'm going to enjoy that."

Starting from Fort Ranik go towards King's Watch. Little Thom's body should be on the hill. Simply approach the body and your Quest Log will update. (There are Grawl and possibly Charr in the area, so be careful.) Return to Farrah Cappo afterwards to get your reward. Can be done simultaneously with Regent Valley Defense.

Tip: It is useful to pick up the quest Cities of Ascalon along the way. King's Watch is one of the three sites that needs to be visited.

Tip: It is also useful to take the quest Regent Valley Defense, and then defeat the Charr that are there, next to Thom's body. 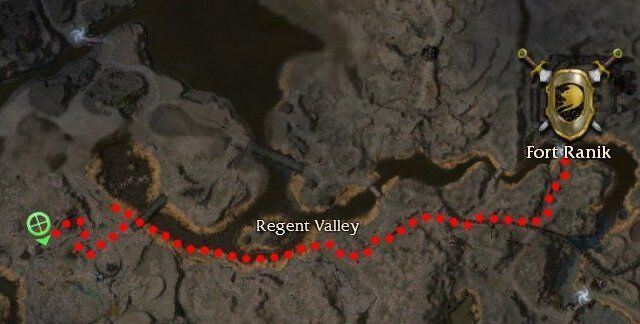