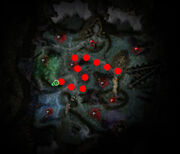 The Shadow Nexus is a 4-person Challenge Mission. The goal in this mission is to close the Torment Rifts before a hole is torn in the dimensional fabric. This is done by killing the Margonite Portal Mages that guard each rift. As long as a rift stays open, the rift progress bar will continue to fill (one pip per open rift). Once it is full, the mission will end.

Initially, each portal mage will be guarded by 2 enemies. As the mission progresses, more enemies will accompany them, making subsequent battles more difficult. You receive 10 points for killing portal mages and 1 point for all other enemies.

Mysterious Armor Pieces are randomly awarded to players in the party after killing a Margonite Portal Mage. Note that these items do not drop in the normal way; they simply appear in a player's inventory.

If the inventory is full, the armor pieces will drop on the ground, so make sure you have at least one empty slot in your inventory before entering.

Mysterious Armor Pieces can be used to upgrade the visual appearance of hero armor to "Mysterious armor". This upgrade is available for Zenmai, Olias, Norgu, Goren, and General Morgahn.