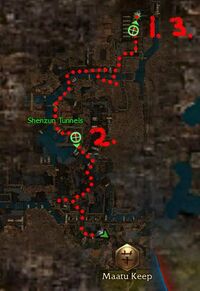 "Now that you have become Weh no Su, you can seek the advice and assistance of Cantha's ancient heroes. Travel to Tahnnakai Temple and speak with the spirits who reside there."

"So, you are telling me that you are friends with the emperor's half brother, Master Togo? Suuuuure you are. And I am the emperor himself. As I have said before, no one but those of imperial blood may enter. Now, be gone!"

"Tahnnakai Temple will have to wait. Nika and the Obsidian Flame have fallen under attack by the Afflicted, and Master Togo wants us to help defend them. He sent me to find you.

We will return the temple [sic] when this battle is over. For now, we must hurry to join Master Togo!"

Brother Mhenlo: "You can take the lead now. I will follow you and watch your progress."

Brother Mhenlo: "Nika and Master Togo are in great danger. We must hurry to join them!"

Brother Mhenlo: :"All right, follow me and stay close. We are in great danger."

Intermediate Dialogue 8 (after defeating the Afflicted)

Master Togo: "That was the last of them. Nika, forgive us, but we must be on our way."
Nika: "I understand, but know that you have an ally in the Obsidian Flame."
Master Togo: "Thank you, Nika. Your heart is as true as ever."
Brother Mhenlo: "Master Togo, I am concerned for our new allies. I would like to remain behind and tend to any lingering wounds."
Master Togo: "As you wish, Mhenlo. It is time the rest of us departed for Tahnnakai Temple."

"If you are with the emperor's half brother, Master Togo, then I can let you enter. Please let me know when you are prepared."

Player response: "We wish to enter the temple."

"When you are ready to travel, I will take you to Tahnnakai Temple. It is an honor that you are allowed beyond this gate, so show the proper respect."

Accept: "We are respectfully ready to enter the temple."
Reject: "Not right now."

"Your entire party is about to be moved to the next area. Make sure all party members are ready before doing so. Do you wish to continue?"

Master Togo: "Come. The spirit of Vizu resides in this hall."
Master Togo: "It was her blade strike that crippled Shiro two hundred years ago and eventually led to his death."
Master Togo: "If anyone can tell us how to defeat him, it will be her."
Master Togo: "Follow me."
Brother Mhenlo: "Keep up if you can. Master Togo is faster than he looks."

"Beyond these gates reside the spirits of Cantha's greatest heroes. They are in great peril right now! Master Togo went on ahead and is awaiting you. Hurry!"

You pick up this quest in Senji's Corner, and the quest marker will lead you north, through Xaquang Skyway, but it may actually be better to take an alternative route, via south of Senji's Corner and then eastwards through the Shenzun Tunnels to Maatu Keep.

That outpost is located closer to Tahnnakai Temple, so in case you fail you can restart from there. Plus, you've unlocked another location where you can rest and regroup. On the downside, there is only one healer henchman in Maatu Keep (Senji's Corner has two).

Once you reach Temple Guard Bai, he will refuse to allow your party into the temple, but Mhenlo will soon appear and direct you to go help out Togo and Nika. Mhenlo is extremely autonomous in this quest. He has a specific path he takes and, unless you are familar with it, you'll find he is hard to keep track of and often seems to suddenly runs off by himself in unpredictable directions quite a distance from you to fight, making it hard to keep him alive.

Although it is unknown whether this is an occasional bug or the norm, it is possible to complete this quest EVEN if Mhenlo dies in the final fight with the afflicted. Regardless of if the quest log displays a "mission failed" notice, as long as Togo survives the last fight and you lead him back to the entrance of the temple, the quest WILL update and WILL allow you and your party to complete the quest with or without Mhenlo. If you don't follow Mhenlo, he'll go off in his own direction and die, whatever route you take to Togo and Nika. He also refuses to stay with the group during the last big fight, so if you're intent on keeping him alive, flag your party at the center and then follow him around with a healer while he runs down the hill to fight the afflicted on his own.