Tribal Shields are a type of shield with two different skins and are found in the Nightfall Campaign.

The first skin, referred to here as the "metallic foil" skin is linked to either Command or Motivation. This is a medium sized shield that is roughly shaped like an elongated hexagon. A bound wooden or metal framework supports the many small panels which make up the front of this shield. At the center of the front are two semi-circular holes on either side of the central part of the supporting frame, above where the handle would be on the other side. This version of the shield is quite common.

The second skin, referred to here as the "mask" skin, is linked only to Tactics. This is a large, roughly oval wooden shield with a spike at the bottom. The front of this shield is decorated with a stylized, smiling face that has been carved and painted into it. This version of the shield is relatively rare. 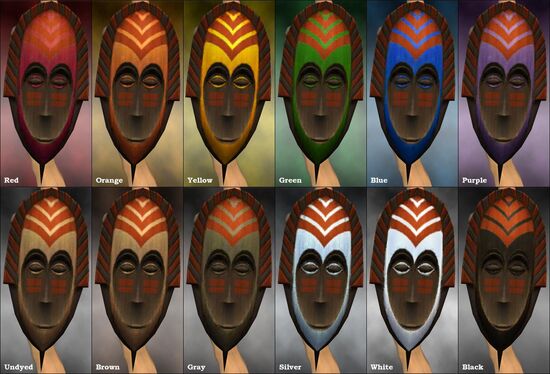