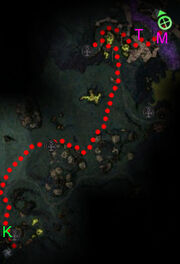 Pehai in Gate of Torment

Dunkoro is required in your party

"You there! You're one of the Sunspears, right? I can't believe any of you actually showed up... alive, I mean. Well, I guess Kormir was right about you Sunspears. What's that? Yeah, I know Kormir. Oh, that reminds me. Kormir said I should send you and Dunkoro out to Nightfallen Jahai to meet her as soon as you arrived. She wants your help in coming up with a plan. Huh. What do you know? I never thought I'd actually have to deliver that message."

Accept: "Kormir's here? We have to see her!"
Reject: "Right, and when we get out there your spirit friends take our souls. No thanks."
When asked about quest: "Kormir is waiting for you and Dunkoro in Nightfallen Jahai."

Dunkoro: "What is this place, Kormir? And, more importantly, what are you doing here?"
Kormir: "This is Nightfallen Jahai. It is but a shadow of the Jahai Bluffs of our world. Abaddon has dreamed it into being, and when the dream is complete, the bluffs will fall into night. This is what Abaddon will do to our world if not stopped."
Kormir: "As for me, I found myself trapped here, pulled bodily into this realm. I am still blind, yet can sense the pain around me. I fear that I, like others, have been contaminated by Abaddon's touch, and my body and spirit are now bound here by that foul taint."

Kormir: "All those who come into contact with Abaddon are fated to come here. It is the only way to prevent their contamination of the rest of reality. As long as Abaddon's presence remains, he will corrupt all he can reach, and doom them to eternal torment here."
Kormir: "The Dark God of Secrets was contained here once; unable to harm those of our world. But he has begun to break free, and he moves the walls of his prison outward. Unless we defeat him, he will turn all of Elona into a nightmare realm like this one."
Dunkoro: "Defeat him? Kormir, that's madness. How can we fight a god? There must be something else we can do; some other way to stop this from happening."

Kormir: "The time for caution has passed, Dunkoro. Every moment we delay is another moment Abaddon uses to grow stronger and reach further into Elona. I need your strategic insights, not your doubts. We need a plan."
Dunkoro: "A plan? For defeating a god? That may be beyond my strategic capabilities."

"Ah, there you are <name>. Kormir has asked me to show you something."

Player response: "What did Kormir want you to show us?"

"Are you sure you're ready to move on? We're entering dangerous territory."

"Ah, <name>! Kormir told me you would be coming. She's gone ahead into the Domain of Pain to scout the area. When you're ready, you should catch up with her. The battlements are heavily guarded, so you should be careful."

Don't stop your pace at the beginning. Talk to Kormir (at K), and then go northeast immediately. In this way, you can avoid the mobs walking towards the portal. Kormir will catch up and does not aggro enemies so do not worry about her.

Follow the compass across the wide, open areas. This quest is super easy if you avoid aggro. With some fancy running and watching of aggro circles, you can get right next to the steps in front of the Gate of Pain without a single fight.

Up the steps will be two groups. The first group will be 4 Madness Titans (at T) right next to whom on the bridge will be monoliths and margonites (at M). It is important that you don't aggro them both at once. So when you go in, run to the left and hold there while you finish off the Titans. After killing them, take out the enemies on the bridge and talk to the tortured sunspear. Watch the cinematic and wake up in the Gate of Pain!