Urgoz's Warren is an Elite Mission accessed from the Kurzick capital House zu Heltzer. This area is home to Urgoz, a forest guardian who is now corrupted and threatens all life in the Echovald Forest. The objective of this mission is to destroy him.

To Access this mission, see the Elite Mission article. 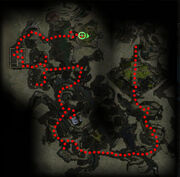 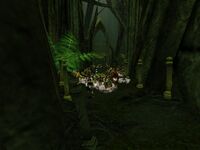 Fighting a pulled Dredge group in the corridor

After you spawn, immediately back up to the doors behind you. Once back have one person sweep ahead to the end of the narrow corridor. Two groups of Hopping Vampires and Thought Stealers will spawn. The first one (just 4) in front of doors, the second one (eight) where everyone spawned in. The Thought Stealers drain all of their victim's energy as they die and the Vampires drain all of a player's life as they die. Dodge the vampires at all cost.

Pull the ones at the spawn point (having traps waiting for them to ensure they don't suicide and kill anyone), once they are all dead pull the second group.

Past that spawn will be a clearing with the Twisted Bark in the middle and swarms of Dredge running arround. While camping in the corridor, continue to pull single groups and dispatch them. Once all the groups are gone, move in to kill the Twisted Bark.

Proceed forward to the stairs and pull the Dredge group in the center to kill them. Then, have one person walk just inside the door so that groups to the right and left come toward the Guardian Serpent. Pull the groups one at a time before taking out the guardian to open the door to the next area. Be mindful that if your party strays into the right or left corridors, there will be a big spawn of Greater Blood Drinkers. Only go there if there is a chest and with careful sweeping.

In this area, all party members will be affected by Life Drain until the Twisted Bark is killed. Stay outside of the area and send in one person to pull the Dredge. The puller may need a healer to be with him to keep him alive as he pulls the Dredge groups. When the area is clear of Dredge, regroup and regenerate before taking out the Twisted Bark.

Do note that the room containing the Twisted Bark is filled with Greater Blood Drinker pop-ups. No less than 5 or 6 groups of 4 each. Sweep carefully and slowly, then head down the right tunnel (a spawn there too) to eliminate the Guardian Serpent.

This area has no negative environmental effect. Pull and eliminate the large groups of Brooding Thorns and Burning Brushes. After those, you will see a bridge ahead with a swarm of Dredge on it. The ramp closest to the entrance (the right side) is a great way to pull or use to attack the Dredge on the bridge. Once cleared, only one party member has to unlock the gate. All can use either side of the bridge to travel back underneath the bridge and out the door. 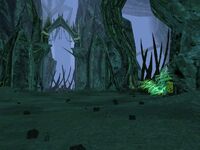 This area is composed of a dark tunnel with a long winding bridge surrounded on both sides by Fire Flowers (they will appear in yellow text). As soon as someone begins to cross the bridge the Flowers act as turrets shooting arrows that cause minor damage, but also inflict burning and crippled. At three points on the bridge, Thorn Wolves will spawn (they are powerful Assassins).

At the end of the bridge, a spawn of Hopping Vampires and Thought Stealers will be waiting (with a similar invisible spawn waiting at the start of the bridge for those who try to run away). Trapping before they spawn will help slow them down.

Unlike other effects, the Sheer Exhaustion effect will only be in the area of the Bark and not throughout the whole area. This area will start out with a clearing. This clearing is filled with several Thorn Wolf pop-ups. Carefully sweep and clear it. At the end of the clearing will be three possible routes, each having a vine gate that opens and shuts periodically. The one in the center leads to the Twisted Bark of this area. The Bark will be in a clearing with Brooding Thorns in the back but once again with lots of Thorn Wolves hidden. Pull foes outside the exhaustion radius and clear the area before tackling the Twisted Bark.

After clearing that area, either backtrack to the previous area and go through the left vine gate there, or clear the Twisted Bark area of all pop-ups and head out through the left vine gate there. In both cases, you will be traveling in a cave passage, again with lots of pop-ups. After passing through a few more vine gates, you'll enter an area that has grass (and more pop-ups), similar to the room with the Twisted Bark. Go right from there to get onto a high bridge. Go over the bridge into another chamber with vine gates (and Thorn Wolf spawns). From that chamber, head right (downwards), until you get to a narrow bridge with a Guardian Serpent at the end.

Warning: Do not head for the Guardian Serpent right away.

If the whole party crosses the bridge together, several very large groups of high-level Wardens will spawn. Each group can have 8 to 10 Wardens, and will bodyblock the way back, wiping the whole team. Instead, let one player remain while the rest cross the bridge (usually the Ritualist). The player should stay until the team has crossed the next bridge after the SECOND Guardian Serpent.

While in this area, all party members will have -4 energy degeneration. This means that most classes will have zero energy regeneration while some (like Warriors) will even suffer energy loss.

The area past the bridge will be empty, but the party cannot all go in. If at least one stays behind, the area will remain empty until those that went in can find and kill the Twisted Bark. This will eliminate the energy degeneration and make things easier. After this, they need to eliminate the Guardian Serpent to open the way to the next area. They must then cross the bridge past the guardian and wait on the other side.

Those that were left behind in the previous area can then proceed to rejoin their group. Ensure that the first group have made it past the second bridge.

The next area will not have negative effects right away, this will allow the party to draw the large groups of Brooding Thorns and Burning Brushes away from the negative effect area to tackle them. After they are dispatched, the way will be clear to the Guardian Serpent. However, it would be foolish to proceed immediately because the Exhaustion effect will last into the final area where Urgoz is located.

The party may try to lure it to them by attacking the Brushes from beneath and force the Bark to come closer to heal them. However, the Brushes may run back and around to try and get to the party (they won't make it all the way around).

If the party relies on the attack damage (rather than spells or traps), then they may also need to repeat and take out the Twisted Bark on the right, which causes the Weakness effect.

This area has no effect, but the effects from the previous area (if still present) carries over into it. It is comprised of a small rectangular room filled with Maddened Wardens, Burning Brushes and Brooding Thorns.

Note: Currently, the Burning Brush and Brooding Thorns are bugged and will not move unless they are "unstuck" by triggering the "ADoT flee" behavior. Brooding Thorns will attack and try to heal and lay traps, while Burning Brush will cast its AoE spells if players run next to it. Attack them with ranged weapons and spells to dispatch them easily.

The room has 6 distinct groups of Wardens. Observing their motions should help the puller recognize when and which Wardens to pull. Using traps and careful pulling, each group can be taken out easily.

After dispatching the Wardens and any Brushes/Thorns in the way, kill the Guardian Serpent to advance.

Warning: Make sure that your entire party does not enter the chamber, because the gates will shut as soon as your whole party is through. The hidden groups will spawn and the large numbers will easily crush the party.

Carefully sweep and pull back group after group. These pop-up groups will continue to spawn for a very long time. It is not safe for your whole party to enter the chamber until you see the door at the other end open, which would indicate that only a few groups are left.

Urgoz with the two Greater Serpents

Before entering Urgoz's inner sanctum there is one Twisted Bark that maintains a Life Drain effect. There is no hidden monster guarding it; the party can just quickly rush in and finish it.

There are three entrances into this chamber each guarded by a Guardian Serpent. Urgoz will begin to talk to the party telling them that their arrival was foretold and that their defeat is certain.

If the party takes the path straight to Urgoz, they will come to a bridge and then engage a group of Burning Brushes and Brooding Thorns. Dispatching them should be a walk in the park compared with what the party has been through.

Once inside Urgoz's inner sanctum, the party will see Urgoz flanked by two Greater Serpents. These two Serpents will not heal Urgoz but will heal each other. It is common for parties to just ignore them and directly attack Urgoz.

The battle offers the following challenges to the party:

Generally helpful strategies against the Greater Serpents and Urgoz include consistent, heavy degeneration in a hit-and-run style.

Alternate Strategy:
Another strategy is based on the fact that Urgoz is a plant, just like those Explosive Growths he spawns. The strategy is to place the spirit Edge of Extinction and have players run around causing as many of the Explosive Growths as possible to spawn. As Urgoz is of the same species as the Growths, he will take damage every time one dies (make sure Urgoz is within the spirit's range). One good location is just to the left of the entrance, by the left Guardian Serpent's door (make sure it is dead first). But be warned that killing Explosive Growths mean detonating them. So it will be harder to dodge them.

You should also have a few fire Elementalists nuking the Growths between moving and dodging. Party members should also help out in damaging Urgoz. Between the damage from Edge of Extinction and the party members, Urgoz should fall quite easily.