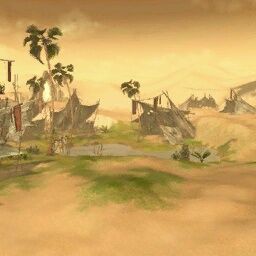 You wake up, you recognize this place, you are in the Amnoon Oasis, as you wake up, you realize that Vipermagi is cooking Baked Potatos and fish. You take a look, the only person missing is Progger, who was mysteriously killed in the night, before he died he killed Marcopolo47, the Mafia Janator!!! . He was the Vigilante. The mafia may have struck, although his crest is still there.

Jïörüjï Ðērākō.>.cнаt^ - role sent - accepted
Majority vote is 4 - I will add 24h after Majority is reached (up to a maximum of the maximum time allowed in the day) for voting to occur.

19:11, 11 February 2008 (UTC):The day finished early (in less than 1 hour) due to inventor item, there will be a short night phase (24 hours). During the next day phase, if Firetock does not talk, and the day lasts more than 24 hours, he will be kicked for inactivity.