I can still play LoD Infuse, and that's rested enough for me. :p -- 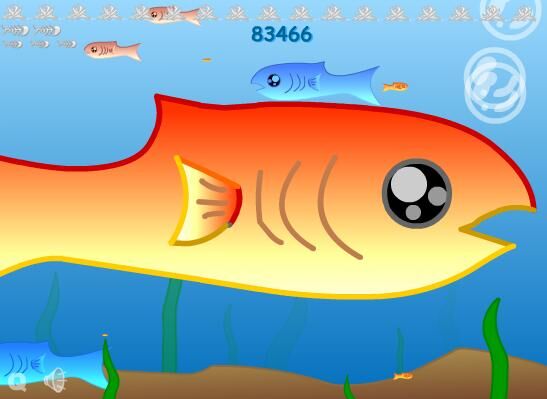 Anyone ever use a Signet mes before?[]

This is the creepiest build that actually works. Well err, disincluding the Thunder Clapper lol. Anyone run this in TA before?

If you wanna run a signet bar, pure smite is always better. try this:

Hmm, a possible choice. However, the Signet Mage I know always runs Holy Wrath. It is usually to help buff the Monk and is really annoying to go up against. SoJ is used for the KD and for anti-kite. The other skills are to help w/ Hex remov and daze for the Monk. Sadly, my old guild leader used a Monk/smite in PvE. It was actually pretty funny, because he used a bar very similar to yours XD. Readem (talk*contribs) 22:17, 16 May 2007 (CDT)

Google is one step closer to taking over the world[]

Gay mail? I use Hotmail Live, it sucks. —SigmA 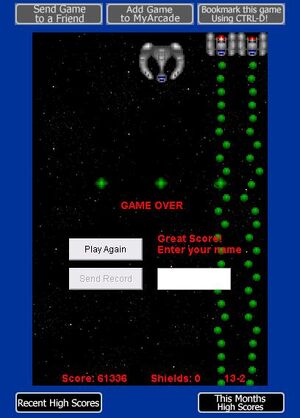 Best I could do in one try. Not too shabby, though. Take a look at their firing speed. :) --

Lol I got the high score of all time in Seven Seas. Either no one plays it, only noobs play it, or they're trying to trick me so I waste 10 bucks playing.—

Were you playing online, or did you download the free trial? 'Cause, you know... it's *your* free trial. Only your scores are on it. :p --

Almost out of School... yeah, yeah! Have a lot of time to burn, lalalala. Going to be playing guildwars a whole lot, lalalalala. Almost as much as Zerris, lalalalala. Ok, I wouldnt go that far, but close lalalala. Yes this is a song...lalalalala! Readem (talk*contribs) 23:18, 20 May 2007 (CDT)

What's your problem with AQ? It's Free. It's a Game. Good might be stretching it, but still... --

Well. Here is why I hate AQ:

Dunno. Played the game a long time ago so maybe they changed it. There used to be these trees that blew wind at you and said "Leaves me alones!". Funny as hell. Readem (talk*contribs) 00:39, 21 May 2007 (CDT)

Um. No. ENTIRELY unrelated. Now it's like GW but 2D, with fewer skills, and with a bad play style. Read: Free. --

On the "contact" part of your page, when did I ask you for money? lol.—

That's what It hought. lol.—

Guess I should have read the "definately not a joke part"...only read the first line XD.—

Greetings noobcake!You are such a nubcake that you get to join (if you wish) Cheese's Nooby Guildhall Challenge! Have a good time and...if the hall page isn't very descriptive now, it will be soon...so live with it:D.—

LMAO I think I already found it (accidently, before you told us)—

that sucks. I jsut followed all your riddles and found something I'd arleady noticed looking at a mysterious IP contributions. lol...and to think I did all that when I already had answer (right above).—

are still quite unattributed. I realize that you have stuff going on and can't get to it, but in the meantime, I have to delete the builds. When you add 'em back, include the history :P -Auron

How did your team not leave the moment they saw you with that skill bar? That is something to be proud of. — JediRogue

You have been playing for 38,429 hours, please seek medical attention and get a life! Thank you! I wonder if it ever stops giving time-in-game messages... i nominate Zerris, because we already know he has no life! woot! :D—

Since when are you logged out of the game? —ShadyGuy

Why is ur name fred? —ShadyGuy 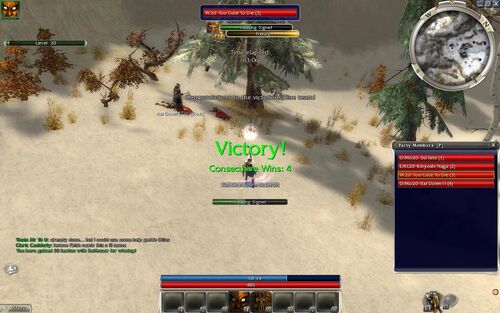 You call that good? I got a glad point with Auron's 2-tanks-in-one build. Lemme upload it real quick.— 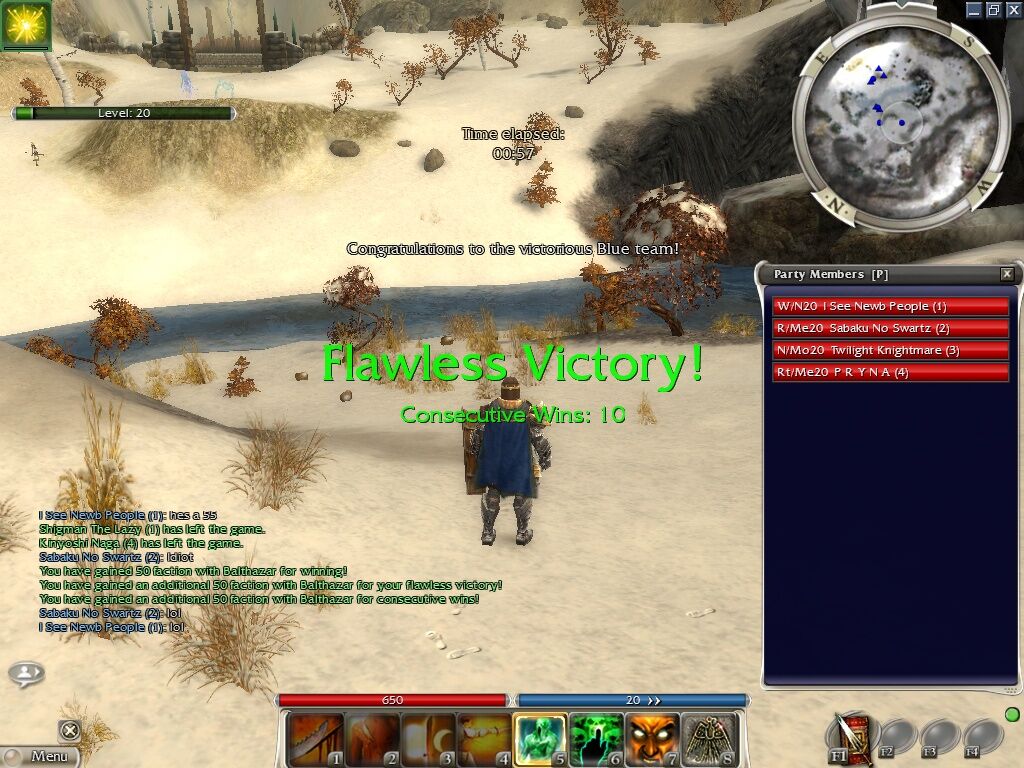 but it was w/o a monk too. the rit's only heals were life, spirit light, and an occasional resilent weapon, tho he usually only used that for himself. :D—

I don't get it. Is there supposed to be a random page redirect or something?—

nvm, one look at talk page:O—

I don't feel like looking to see if this question has been asked before. Anyway, so what does your name mean, Readem? What's so Readem about you? and are you really Readem? And yes, I know, curiosity killed the cat, but as you can see, I'm no cat. --

My name is not in fact, Readem. You see, most of my characters are named after old expressions, or a play on words. Readem, my first PvE Character (Yeah, I just started PvE lol), is a play off the expression "Read'em and Weep". Since he was a Dervish, I replaced "Weep" with "Reap" instead. On Guild Wiki however, I am just Readem. Readem (talk*contribs) 02:10, 17 June 2007 (CDT)

Okay. Two names (okay, correction, usernames) down. Who's next? --

Ah, hmm... can't I just say he's really a rabid Ah! My Goddess fanboy in denial and leave it at that? Much easier. --

Possibly you on official wiki[]

If it's you posting on the official wiki anonymously and signing things "Readem," please stop. Since that account is registered, anon users signing things with that name must be interpreted as an imitation attempt -- now that I've tried to get in touch with you about it, I'm going to start blocking any anon IP that signs a post "Readem."

gratz with yer new userpage, but imo it is a bit to dark, I can't see the links... —ShadyGuy

It also makes it easy for others to copy your page by using the template, muahaha!

No no no. Do this: User:Readem/ReademPage and keep it in namespace!

omg, ur userpage looks so much better on firefox. —ShadyGuy

I've always had a hard time picturing hamsters in the wild. I get this mental image of a horde of them devouring a cow or something. I immediatly tought of you when I read it :P Dunno why —ShadyGuy

Just FYI, the ban template should go on the user page, not the user talk page. :p

Anon IP doesn't have a userpage or a talkpage when they first come here, unless they made one already. When the +ban notice goes up, technically that is a "new page". When an admin does a ban/block thing, they also do a delete of that user and userpage (since the notice is no longer needed). Putting the notice on the talkpage just makes for one extra click of delete since both the userpage and the talkpage need deleting that way. Not a huge deal I know, but I just thought you might be interested in knowing. Oh yeah, and especially putting ban on both the userpage and the talk is not needed :p

Another thing to note: Try to keep edit summaries accurate. Adding a +ban notice with "Happy Birthday!" as the summary is kinda...well it's not a good thing, least not for a proper respectable editor. It can get you in trouble if you're not careful...

Well, just remember that an honest editor should try not to sink to the level of the vandals themselves. You don't necessarily have to "Treat them the same way you wish to be treated", but that also does not give you license to lash back at them with rudeness or snide remarks...I am not saying that your case was particularly bad or anything, but even a vandal is a human being on the other side of the screen. "Happy Birthday!" and a +ban notice is just a bit unnecessary don't you think? A ban notice itself is sufficient admonishment to smalltime vandals; there's no call to rub it in, not really. I might feel differently if that user was a serious vandal who blanked like 10 pages or whatever...but they seemed to be doing it for their own (admittedly strange) sense of amusement, and it was very easily repaired. So meh. I guess I am just saying that you should not let a vandal's actions turn you into a troll.

This is pissing me off to a certain degree...this happened to my last User Page as well. Why is the text reverting, while clearly it should be White? It was before...and no one touches the template I made...so I don't understand the prob. Anyone know? Readem (talk*contribs) 20:47, 27 June 2007 (CDT)