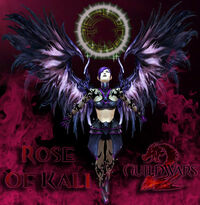 Just trying to keep a list as I see them around, maybe some day I'll even buy something. :P

If you have a different price than one that's listed, please post your in addition, do not remove the previous.
Add your source if you can, like did you see it for sale or just heard a pc or saw someone offer a price.
All undedicated please or state "ded". Thx much. RoseOfKali

Bahahaha! So how many stacks of Pandas would that be? :P RoseOfKali

Read what Macros just said above you imo

That's actually more relevant to what Rose originally intended this section for. The person who bid 100 trillion did so as a joke, so Rose can't really record its price here. I just like to spam. --Macros 15:30, 11 June 2009 (UTC)

He also said it would remain unded.

Um, I know? That's what the "e" is there for. O_o And "known" kind of implies that it's unconfirmed speculation. I do wonder how they managed to trade 200 stacks of ecto. 4 stacks of Armbraces is a little bit more doable. RoseOfKali

It does say "Ectos" when you follow the link. O_o RoseOfKali

Read what Khazad Guard said. I never said it's not ecto...

Ridiculous either way... >_< Don't confuse me when I'm PMSing and just correct the damn typo. RoseOfKali

"Read what Macros just said above you imo" I did. Macros was talking about a bid (that we can assume was fake) and seeing how many ectos/arms/pandas/accounts the guy needed (gave me a good laugh). The thing I posted has some bearing on what Kali was looking for, until then she had no "value" on an Unded Kanaxai and I hoped to give her at least somewhere to base it off. Also if it helps I (first hand basis) sold my Unded Polar Bear (R.I.P. Jingles...) around four months ago for 1650e (21e/100k). Of course given that that was four months ago, it's kind of outdated... Khazad Guard 03:02, 12 June 2009 (UTC)

Well, this list isn't exactly the most up to date, but high-end prices like that fluctuate depending on power traders and have a general trend to them, which is why I'm not worried about an exact price, but more like a ballpark figure. I'm already dreading the next Wintersday, because I'm going to do the same thing I did last year: farm that blasted dungeon 15/7 for about 3 weeks or however long the event goes... >_< Here's to hoping I actually get one this time. RoseOfKali

My guild was doing that last Christmas. We had a standing agreement that if any of us got one, I would sell it for the guild and split the profits. Alas, our bleary-eyed repetitive endeavors were for naught. Nwash 06:23, 12 June 2009 (UTC)

Ran that quest for what seemed like an eternity. My guildies wouldn't stop annoying me saying I would never get it; luckily those pretty golden letters finally appeared. I spammed GC for ages with "I got one!" to shun the non-believers. They still call me "Polar Bear face" though. Can't wait for this Wintersday! Hopefully you get one this time around ;) Khazad Guard 15:40, 12 June 2009 (UTC)

You have rollback rights now; please read GW:ROLL to find out when it is appropriate to use them (when in doubt, don't). What you'll find more useful is another right that comes with it: you are now able to rename files using the "move" tab, if I'm not mistaken. Use it wisely! --◄mendel► 00:13, 16 June 2009 (UTC)

Cool beans. Slap me lightly if I eff up. I probably won't be rolling back a whole lot (or like ever, except obvious vandalism, but other people usually get to it before me), but I will probably have a use for the image moving ability. I checked, and yes, it did give me the option to "move" and rename images. Thanks. :) RoseOfKali

I was under the impression users could remove comments they find offensive from their talk page.
Sorry for recommending a few SoO runs.
No matter what the fuck I do Rose insists on being hostile.

You can basically remove anything you don't want from your pages; they're yours after all. I just found it funny, in a way :)
I doubt Rose was trying to be hostile. A horse shoe brings luck, and you were extremely lucky. She, in a way, asked if she could borrow that horse shoe of yours (so she could find some l337 itamz etc.). Creative writing ftw. ---

-- (contribs) (talk) 20:52, 22 June 2009 (UTC)
(edit conflict) You, Sir, are bad at getting meaning. "horseshoe in your ass" means you're extremely lucky (horseshoe=symbol for luck), and Rose wants to have your luck because she envies you. I'm sure no offense was intended. --◄mendel► 20:55, 22 June 2009 (UTC)
(edit conflict x2) O_O WTF? My apologies for using a common humorous saying with less direct profanity than your initial post to note that you got insanely lucky, or BDS's wouldn't cost as much as they do if there was a 67% drop rate. I was in the middle of getting you this, by the way, since I noticed you were curious: Image:Necromancer green chaos.jpg, but got a database locked, and then some ECs, so here you finally go. I guess I'll leave you alone now, I don't think we'll ever understand each other. RoseOfKali

And yes, Viper and Mendel are exactly right. RoseOfKali

Eh, it's funnier if I flail my arms around and scream for mommy. Then accidentally hit myself in the face, get a black eye, and blame it on him. (true story, my hubby's sister did that to him, but nobody believed her anyway, and now it's one of our party stories ^_^) RoseOfKali

Lol, hi. I saw you there too before I left. ^_^ RoseOfKali

Hehe, hi. ^_^ After I saw you, that uber-haxxorz-leet group we slapped together went in to kill the Forgeman without the quest. XD Got some good drops, and then admired that pretty locked gate before resigning. :P Good times. RoseOfKali

Hahaha, jeez... My Discord partner went afk without warning for 10 minutes, but he did come back, and we finished. PUGs....

I moved the Boardwalk Prize article over its redirect as per your request, but the article doesn't make a lot of sense now, since it still refers to Boardwalk Prizes. The dates seem a bit muddled too. Do you think you could fix that up?

Was in the process of doing that, thanks. I don't know much about the change-over, so I'll do my best. RoseOfKali

Weird, that should have been done automatically. One sec.

I changed the Images of Diessa Chalice and Glacial Stone to png. And set the jpg to be deleted. And your the only one who's using them so.. That you know :P --

Haha, ok, thanks. ^_^ In the future, feel free to change things like that yourself without permission. ;) RoseOfKali

I shall ;P. But isn't that against the rules. To Add other players Userpages :O --

Well, it's not like you're changing anything really, it's the same image, only better. Now, if you go and redesign my userpage, I might yell at you. :P RoseOfKali

You should upload the map with the paths under a different file name and include it on the page as well, imo.

Paths are useful in mission maps and maps that lead you to a certain place. What's the point of paths in a map of a full explorable area? RoseOfKali

Heh, yeah. I was thinking more of a map for the landmarks, I didn't really realize it was the general explorable area map. Anyway, Ill go split up the map for each individual landmark. N Segick 06:45, 24 July 2009 (UTC)

Hi, got a chance to finish Vlox with H/H [HM] ? I'm having a trouble in there,let me know if you know a trick or something. I don't want real people or runners just H/H. also character wise and builds isn't a problem for me as I've all the characters. thanks in advance.—The preceding unsigned comment was added by 94.98.66.133 (contribs) .

If you mean Vloxen Excavations dungeon, then I'm sorry, that's one of only a few HM dungeons that I did with people, it's just too much trouble to H/H. Duncan, SoO, and Rragar were the other "human" ones for me. RoseOfKali

I noticed in the Category:Quest Items page, there is a fake user-created quest item listed there, from El Nazgir's page. That is a page for Guild Wars quest items, and nothing made-up from the userspace belongs there. I couldn't figure out how to edit it or remove it from that page (or even to unlink it from his page; yes, I tried that). There's definitely something wrong with me, but it's bugging the heck out of me, so if you could figure out a way to get that removed, I'd really appreciate it. Thanks so much! Ailina 22:13, 1 August 2009 (UTC)

Would be better to split the left and right profile images, we have a template input for that. Also, the mask has some shadows on it, would be good to retake in the sun. Took me a second to catch on that you were asking about the Male gallery. :P RoseOfKali

If anything, give 2h weapons less ED (equal is fine-ish). Scythes and Hammers already easily hit for 90+ without attack skills (crits are lolsome). 5% is not a lot, but it's still something. It's like giving WS 5 more damage. It's not much, but not clever regardless because it's already much stronger than almost everything else. ---

The reasoning was that you are missing a second item, shield or focus, but most of them do have much higher damage, so I guess it evens out. RoseOfKali