I love your userbox..

This user hates pugs that don't take Assassins with them. Speaking of sins, I have a very awesome dual build (both sins) for Slaver's Exile. I'll post it later here. BTW: I have an account on www.pvxwiki.com/wiki/User:Adriaanz. Post there also if you're interrested. K, thanks for looking. 83.82.221.230 12:38, 19 February 2008 (UTC)

I like your Mudkipz box too ^^ But I'm afraid I dont have GW:EN, couldn't afford it yet, only have the 3 other games.
Maybe you wanna try my contest? Design an E-lead-e - Contest --

Nah, only if you wanna do the E-lead-e-contest on the other page ^^ I guess in it's current form Monks would abuse my elite hardcore.--

Not if it was in Critical Strikes. :P (thievery? wutz dat? :o) And could you change it into a link instead of an inclusion? — Poki#3

It's a template. And there changed it, now it is more balanced :P --

Also, I did design a lead skill if you go look --

What is your opinion on ritualists --

I hate them very much cause they are better healers in smallscale PvP than monks, and their game concept is unbelievably unfair in smallscale PvP aswell, by the time the teams clash, the ritualists teams already has 4 additional allies that blind, knockdown, heal or do other stuff, and if you kill the spirits, you die, if you don't, you die aswell. Can't comment on a PvE or GvG perspective on 'em.--

Those Icons rock, you can actually tell what they depict in the highres version....the woman on deadly paradox is spamming Dancing Daggers xD --

Yes its my little project i have been working on. only war, ranger, sin, and derv skills are done, i have been slacking lately. --

Looks like she is missing an arm in my opinion. My favorite skill images are shadow form (waving lol) and temple strike (face punch lol). --

*glances at his shiny blade with a murderous look in his eyes* Care to elaborate? It better be good. — Poki#3

Yeah, pretty nice. I assume this is for a resolution higher than 1024*whatever the other number is, because I see 3 chars on a row and then 1 on the next one all alone on 1024*X .
And now for something completely different: What armour is your war wearing? I like it ^.^ --

Yeah, I run 1280x1024 which is pretty standard (or even substandard with all those widescreens) today...
The armor is Primeval Warrior Armor dyed in Silver+Blue --

Heya, I like how you're uploading new images for the armor galleries, however it would be nice if you used a part of the beach on the Isle of the Nameless backing water for the background as it's simpler and offers better contrast. Around here is good: 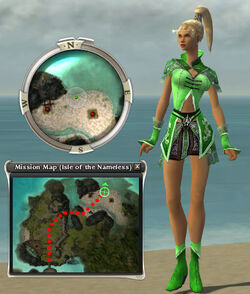 Yes I know, I will update the Primeval and Platemail, but I haven't come around to doing it the past days. --

w00t. I think it looks more elegant. If only there was a way to update all things where you ever signed o.o --

Except that it's too long. GW:SIGN says 50px width maximum.--Łô√ë

SIGN acts on the assumption that the image is an addition after or before the name though, the limit is there for length reasons mainly. It wants to prevent users from adding mile long pictures after their name that become disruptive to reading. Since my pic replaces the name it's not an issue, size neither, my whole name is smaller than your G :P (1 vs 1,1 KB). All policies and laws have to be applied with a healthy common sense IMO, otherwise we humans will drown in bureaucracy (you tell me, I live in Germany ugh). Regards --

It applies to all signature images, whether or not they replace the original name. I sight Slippery Slope.--Łô√ë

I had to wiki that term first o.o" Wouldn't be hard to update a policy for once, though? Moar powah to the users. "If your signature image replaces and represents your name, it may instead be 80-100px (anything in that range) long". --

Try it, more power to you, but I have to warn you, the last 2 people who tried to push that eventually raged because of opposition to a change to GW:SIGN.--Łô√ë

Couldn't you have added that in one edit? RC is full of User:Gigathrashes now >.>" ---

This is how your first batch of cards came out

Because you don't like the new versions, I made them with old versions except for wisp.

Say something if you want me to edit them somehow.--Łô√ë

Salvage Kit and Dash have been updated.--Łô√ë

Finally got one, now I only lack a Para which I don't like playing. --

This is how your second batch of cards turned out.

I ran out of oneliners.--Łô√ë

This is how your third batch of cards turned out.