To help me improve my contributions, please add your suggestions here in reverse-chronological order. Thanks!

On talk pages (and a few other pages), next to the Edit tab at the top there is a "+" tab. Click on it to create a new section. This is useful if you want to create a new section on a talk page that is long (so you don't have to scroll down). It also formats the summary in such a way that in the Special:RecentChanges a link takes people to the section directly. (-: -User:PanSola (talk to the

I've changed it on the ones you've actually saved. Also note that for consistency I put the map on map= even though that redlinks some images; with luck, readers noticing that will take screenshots that can be uploaded more easily by clicking on the red link. --18:07, 6 March 2009 (UTC)

cool - thanks for the note.

Are you sure you're not confusing him with Fryn Rageflame? He's the one with Maelstrom. I would normally revert immediately, but I'm feeling GW:AGF today... RoseOfKali

Yup. Didn't even run into the Frynster this visit. Next time, I'll take a screenshot and leave it on a talk page :-). I was equally surprised (kept looking at the cap menu - that can't be right, can it?), although I suspect few have tried to cap all the bosses in The Falls.   — Tennessee Ernie Ford (TEF) 07:02, 27 March 2009 (UTC)

Hmm... It just seems surprising that one of the bosses would have 4 skills and the other 5. Dammit, now I have to go buy a cap sig... >_< Unless you are so kind to take a screenie: next time remember to screen everything that seems "off" or you will be questioned. ;) RoseOfKali

I can't confirm that he has five skills; I could only double-check the four

). It's already odd that he is supposed to have two professions, so... I dunno.

As to why no one noticed: I think not that many ppl spend time in the Falls; it's out of the way, ppl go there to get totem axes, and there are easier ways to get Maelstrom. You'll notice it's also one of the zones missing (some) HM details.   — Tennessee Ernie Ford (TEF) 07:31, 27 March 2009 (UTC)

I'll try to get him with my E/Mo at some point, this is very odd indeed. Though, Jungle Trolls also have two professions, so it's not unheard of. RoseOfKali

If you do an update for HM, you might want to clarify the warnings. My NM experience: you have to be careful everywhere. In the Totem Axe area, you can get skale + rider + life pods converging on you (per the warning). In the early zone, you can get redwoods + trolls + spiders + pods, not necessarily easier (depending on the party/build).   — Tennessee Ernie Ford (TEF) 07:56, 27 March 2009 (UTC)

I'll see what I can do in the near future (I'm getting my LDoA tonight, FINALLY! :D). I don't remember this being particularly difficult when I VQ'd it a long time ago. The biggest pain are the chained CoF's, so bring quick-casting skills and flag apart your heroes before you engage, and you should be fine. This will be interesting to do again, as I don't remember it at all from last time. RoseOfKali 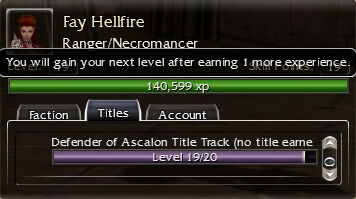 Just realized that I could manage to pull it off in the last 800XP or so, and decided to go for it. :P Took some math skillz to figure out what lvl enemies to kill. ^_^ Almost all XP you get in Pre is in even numbers, with a partner or solo. The odd "residue" was from way back in time when lvl 0 enemies still gave me XP, because they give 5,10,15,20,25 XP. After lvl 5, the only XP combinations you can get solo or duo are all even, because the raw XP is always a multiple of 4, which split in a party of 2 still yields even #s. Guess I got lucky at level 5. :D RoseOfKali

We could do that.

God that freaked me out, I thought someone was already making fun of me on the infamous Darthishittia... Don't do that! lol RoseOfKali

I looked up their code, which has:

I'll trade you one for a totem axe. ;) RoseOfKali

They drop, but from my experience they are much rarer than Totem Axe... I've gotten maybe 10 Totem Axes in my career, and like one fan.

I put together this matrix to help me understand what was frustrating about the current location taxonomy. Feel free to amend, suggest, etc.

Table notes: For completeness, I included GNW (the mission). For fun, I included Single Origin Chocolate — shouldn't the game include fancier sweets? And a bonus for anyone patient enough to read this far :-)

Mendel's Observations: For PPva (combat areas), those with a portal are those you only leave when you want to (unless DP 60% for the whole party and such), while those without work in different ways. Some areas can be vanquished, others cannot. Command Post is quite interesting, too, because it even has a Profession Changer - as does Senji's Corner. One is an explorable, the other is an outpost. --◄mendel► 00:05, 22 February 2009 (UTC)

RE: mendels' observations - good to know. I don't know much about PvP or PPva. Does anything (currently in matrix) above change in HM? I'll add columns shortly to reflect combat areas.
FWIW, I beginning to think a big source of issue around ____ Outpost is that NCSoft reuses the name three times (confusing enough) while wikia and official wiki only have primary articles on two of the uses (the Missions and the [tbd] Outposts). --Tennessee Ernie Ford (TEF) 05:35, 22 February 2009 (UTC)

LOL. As one pedant to another, I approve the intent if not the logic. What I was thinking: the instances exist only until you leave (by whatever route), so that, while they exist, they are unique. And unique contrasts rhetorically well with shared. Still, strictly speaking, PPvas are shared between humans in the party. Hmmn. --Tennessee Ernie Ford (TEF) 17:12, 22 February 2009 (UTC)

If you're thinking about how long the instances exist, they'be either persistent (Outpost) or transitory (Explorable). --◄mendel► 18:13, 22 February 2009 (UTC)

Cool — thanks also for teaching me to fish. And great idea adding the links and the icons!
BTW: As I reorganized, I took the liberty of splitting your observations from suggestions - I hope that was ok. :-) --Tennessee Ernie Ford (TEF) 05:35, 22 February 2009 (UTC)