Anybody else wanna clean this up? I did everything I could with Cute And Innocent, but I don't have the mask, and the male assassin portion of that page still looks awful. --

Is the first one in isle of nameless? -Cheese

Ok... can anybody tell me a way to format text so that it all stays together? Specifically, so that in this paragraph, the text stays to the right for the whole piece. --

Was used for Chest Running in FoW, Raisu Palace, and Nahpui Quarter before the Chest update. Plays B/P when needed for actual missions and quests. Still hates the Sharpen Daggers nerf. Has 99.3% explored in Cantha. Wears (and is currently the character pictured for) 15k Exotic Armor. Do not hug, on pain of stabbity stabbity.

Fixed this instance of the problem, but would still apreciate an answer for future such problems. --

Well, I did name my Dervish The Reaper... What are you implying? And maybe my Elem is just the Evil God(dess) of Dwarves... --

Well, I wanted a Female character who could actually seem threating. So she's maximum height, named The Destroyer, wears Obsidian Armor, and blows stuff up. --

Trying to upload some Sceenies, when I then relize I don't even know where the folder is...after several attempts of finding it, I have given up. Any idea where the Guild Wars Screen folder is? Readem (talk*contribs) 14:18, 29 April 2007 (CDT)

Assuming you have Windows 2000/XP, yes. First go to "Paint" if you have it. Then go to "Open". From there, click on "My Computer", "Local Disk (C:)", "Program Files", "Guild Wars". From there, click on "Screens", then select the one you want and load it up. Save it (With a new name) in "My Documents" (or wherever you put your pictures) then upload it to wiki. If you don't have Paint, just do the same, starting at "Start", and right click to go to "Explore". Then continue from there. --

Congrats! You are currently tied for first place! See the Results sections of the SoW to learn more about votes! Readem (talk*contribs) 16:59, 29 April 2007 (CDT)

Congratulations, you are officially the SoW winner this Week. I have set up the new skill, and would like to know if a I should make a userbox for you or not. Have fun with this weeks SoW :D! Readem (talk*contribs) 21:20, 30 April 2007 (CDT)

Thats a really impressive hour count. Keep up the good work :) BTW over how many months is that?

What do you think? Since the day before Guild Wars:Prophecies came out. :) --

You think I plan things more then an hour in advance? -- 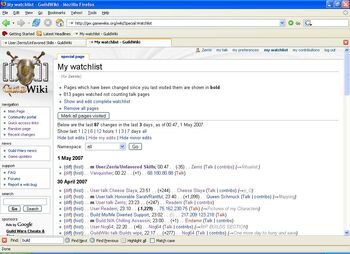 I edit fast enough that it shows my own edits in my watchlist in Bold. :) --

You now officially achieved 10,000 RRPM, and are the faster Rollerbeetle out there! — Poki#3

Imao, finally figured out the secret of Self-edit conflicts! Don't worry Zerris, your secret ti safe with me. Readem (talk*contribs) 00:29, 1 May 2007 (CDT)

It's easy. I do it all the time, I liek to hit the back button:D—

Back button won't do this, it'll just get you edit conflicts... to do this, you have to be editing fast enough to beat the lag time on GWiki itself. :p --

I finished it, with just 3 Hours to go. Anybody who wishes to use it (perhaps for future contests) is welcome. -- 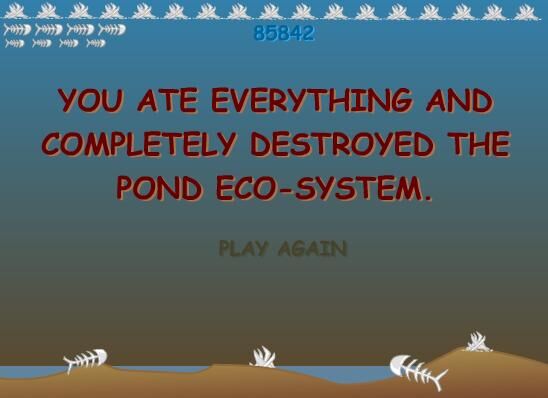 Where else does winning the game make you lose? :p --

Meh, it's just a Dwarven. My Armor + Weapons on my Ele (and I have a whole other set of rares in addition to that staff) are probably worth a tiny bit more. But if you pull out a Crystalline modded like that, then I might be impressed. --

Have you seen User:Craze? So rich he dyed his inventory bags black... — JediRogue

I prefer mine a pretty Purple or Dark Green... --

Did calculations. Zerris's armor + weapon is only slightly lower then your axe. By about only 1-2 100k or so. And that is only if Dwar axes have not gone down due to the introduction of the elemental sword. Which is totally pwnage btw ;). Just asking where in hell did you find your axe hehe? Readem (talk*contribs) 08:34, 15 May 2007 (CDT)

Look at the above comments and you'll see why I'm starting to feel like a community forum. --

That reminds me of when I played about 30 hours of guild wars in one day... --

Wondered when somebody might notice. Hint - I have two accounts. --

I found it! or at least, a varient. Can anybody find me the better version of this? I know there's one out there. --

It even has the same levels, just looks uglier. Somebody's doing copyright fraud! --

I wish I could have a guild that wasn't populated by noobs...I like never can find a team to HA in my guild, just with my 3 friends...so I have to pug a lot:(—

Having 55 blue fish and 66 guppies/big fish can be very weird when playing insane aquarium...lots of diamond-picking and feeding to do O.o—

I discovered that once I got the mermaid in that game, if I got ~ 100 gold fish, the mermaid song took so much bandwith that I could crash my mom's internet in the other room. Also slowed the game down to about 1/10th speed. :p --

I figured that out myself. :P—

I just find it funny that wiki thinks my userpage needs an archive. :p --

Ill be on both days PM me when u want 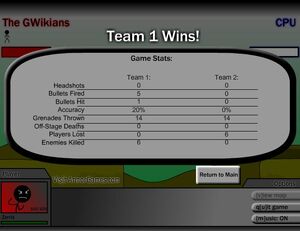 Thanks... What they need to do is fix the aiming AI. They can't throw a grenade onto a platform period, and they often shoot at the ground. =/ --

Agreed the only REAL danger there is with the AI is when they are on a platform above you, then their granades actully have a chance lol--Patch 20:58, 18 May 2007 (CDT)

Check out the bottom of Zerris' (junky) user page :P It's called Territory War, and IMHO it's bed and not interesting. Just get any (non-3D) version of Worms. — Poki#3

Well, if you get me a free online copy of Worms, I'll replace it. Feel free to suggest any games that should be on that list. :p --

LMAO he's not an admin.—

No, I'm not an Admin/Sysop. I just like the title "Minister of Knowledge" and I try to live up to it wherever I go. Having way too much free time (i.e. no life) always helps. --

Can somebody make it so that the User Contributions are numbered, like the way these and these are? That way, those of us with OCD and too much free time don't have to spend an hour counting them 1 by 1. --