GuildWiki
Register
Don't have an account?
Sign In
Advertisement
in: Character stubs, Spoilers, Heroes (Eye of the North),
and 2 more
English

Vekk is an Asura elementalist hero in Eye of the North. A young and hot-blooded Asura, Vekk is very smart and possesses the ability to create marvelous magical equipment. He likes to complain and has a large ego.

Vekk is an eager young Asura. He and his people have been driven to the surface recently, and he is curious and interested about this new development. Of late, Vekk has been working with another underground race, the Dwarves, on maintaining a set of magical gateways through the Depths.
Although he may not seem daring or even outgoing, his clever mind and agile fingers can create amazing magical items and explosive assistance when his companions are in need. If you can overlook his grouchy and slightly condescending nature... he's actually a very good friend.
As with all Asura, Vekk believes in the Eternal Alchemy, the world’s universal flow of energy and purpose. He is considered one of the finest minds among his people, and is always looking to perfect his craft. Of course, it’s not easy being perfect when you're surrounded by idiots... . 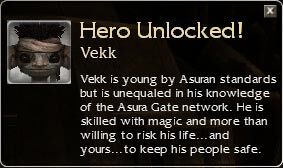 You will receive this hero as part of the reward as soon as you finish the Quest given to you by either:

Vekk has elementalist armor labeled as an Asuran set. His headgear is hidden. His armor has +5 energy on chest and hand pieces, energy recovery +1 on legs and feet pieces, and an armor rating of 60.