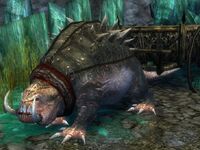 A wallow found in the Echovald Forest

Wallows are large round beasts found in the land of Cantha. They have a reptilian body that resembles a short, fat, dinosaur but their faces are round with slanted eyes and giant tusks protruding from their mouthes.

Wallows are native to the Echovald Forest as well as the green hills in the areas surrounding the Jade Sea. They seem to posses natural necromantic abilities as all the different types of wallows found in Cantha are necromancers. The necromancer skill Wallow's Bite is named after them. They can be encountered roaming the wild in groups, such as Rot Wallows, or tamed by other races, such as Fungal Wallows which serve by the Dredge and Sheena and Brutus which are tamed by the Kurzicks.

In addition to being used as necromancers, they are used by the Kurzick as beasts of burden as seen in the picture.