Wardens On the March 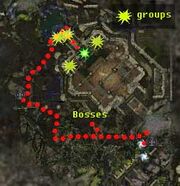 "Your earlier heroics enabled us to reestablish our hold on Arborstone, the sacred cathedral of the zu Heltzers. Within its depths are great stores of magical amber. Unfortunately, as a side effect the wardens have been drawn to the area in droves... and our defenses have been overrrun! My nephew, Terrik, has been trapped inside. He is a talented stone singer, able to control and construct magical protectors, and I sent him in to summon stone guardians to help fend off the wardens. But despite his talents, I fear that he alone cannot win this fight. Please, help Terrik zu Heltzer and zu Heltzer Guardians defend Arborstone at all costs."

Accept: "I will find your nephew and protect Arborstone!"
Reject: "I've got bigger problems. Forget it."
When asked about quest: "You must hurry... Terrik zu Heltzer and the zu Heltzer Guardians cannot defend Arborstone forever!"

"You have my thanks, and the thanks of both House zu Heltzer and the entire Kurzick nation."

Head out to Arborstone from Altrumm Ruins. Follow the wide corridor to where the quest star on the map is pointing. You will engage several Warden groups along the path. You cannot go straight to the mark on the map, instead you must climb the stairs on either side.

Beware that if you come too close to that mark from below, you will cause the assault to begin which (by the time you go around and up the stairs) will mean Terrik's certain death. His death however has no consequence as you will still complete the quest successfully if you kill the Warden groups.

This is a difficult quest. There is a priest at the resurrection shrine who offers a blessing for 100 gold, this is worthwhile. You will be assaulting groups of Wardens larger and higher level than yours, and they will be sitting in a nest of spirits and traps. A direct assault is suicide. Assassins will find that a shadow step to the middle of the pack results in almost instant death.

This quest is difficult to do with henchmen, as they do not lure and disengage well. They will charge the pack of wardens and traps and die quickly. Best hope is to take out the casters first, even if it means dying and coming back to finish the fighters.

Alternate Strategy: This strategy is particularly useful if you're using henchmen as it allows you to sneak up behind the groups of wardens waiting behind (northwest of) Terrik and engage these groups of wardens one by one, rather than triggering the quest and having them all ambush you at Terrik.