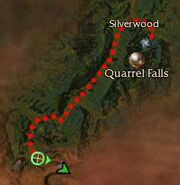 Path for first half of quest 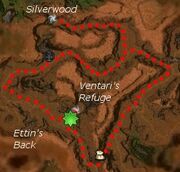 Path for second half of quest

"We have been betrayed by one of our own! A traitor has given away the location of the Shining Blade's bases throughout the region. In response to Hablion's death, they are launching a massive strike led by the Demagogue.

Scouts have reported a vanguard compromising three groups; they're currently pushing towards Quarrel Falls. We must warn Councilor Vaylor outside of Ventari's Refuge. I need you to head them off and buy us some time."

"You have bought us time, hero. Your deeds today will not be forgotten, and they certainly won't go unrewarded by the Shining Blade. We are grateful for your assistance.

Gareth's support will be here shortly."

Follow the path that curves from the north of Quarrel Falls to the south, towards the exit into Ettin's Back. There are three groups of White Mantle that you must defeat. Each of the groups usually consist of two White Mantle Knights and a White Mantle Sycophant.

Once the last group of White Mantle falls, this part of the quest is finished. Head into Ettin's Back. Cut South West through ravine where Hember [collector] stands. End with Councilor Vaylor. You will find groups of Maguuma roaming as well as Devourers; be careful not to aggro too many as fighting a large group of Maguuma and Devourers at the same time may be deadly.