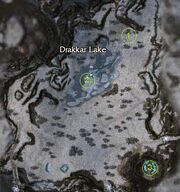 Locations of the bosses 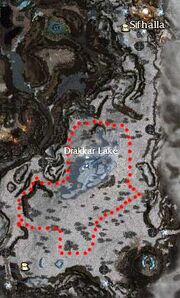 "If you want the Norn to take you seriously, make a name for yourself, <name>. Do as I have done: vanquish vicious beasts in the name of fame and glory! Many Norn post signs in their hearthsteads about the fearsome beasts they have encountered. Read the signs behind me... if you dare!"

Accept: "I shall defeat these foes and earn your respect."
Reject: "I don't need your approval."
When asked about quest: "Crush my foes. Defeat the same creatures I have... then you will be worth something."

"Wipe that smile off your face. You've hardly accomplished anything of merit. I have faced and defeated far greater enemies, you puny thing. Go boast to someone who cares. Perhaps a child, or the village idiot."

Anything You Can Do

All three bosses can be found in the Drakkar Lake area. Koren Wildrunner patrols near the frozen lake, and is near Myish, Lady of the Lake who will be on the lake itself (surrounded by many Chilling Wisps). Like many EotN mobs, the Wisps follow a long patrol route, so try to avoid fighting them along the path they follow. More mobs can quickly pile up.

Nulfastu Earthbound is located down inside a pit south-east of the lake (between the portals to Varajar Fells and Norrhart Domains), known as Rabbit valley by some players. As you near him, about two dozen level 15 and 20 Vaettirs spawn, and more mobs will pop-up when within aggro range. To avoid an instant death, send one disposable hero / party member down to the rabbits to trigger the spawns while the rest of the party waits at the top of the pit entrance. After the Vaettirs spawn in a circle, walk down slowly, luring a few at a time. Be aware that on the path down small mobs will pop up. The Vaettirs are mostly only level 15 and do not aggro en masse, so one dead hero should not be much of a hindrance if they are pulled carefully.

After those 3 bosses are defeated, return for your reward and the follow-up quest.