This monster-related article is a stub. You can help by expanding it according to the style guide. 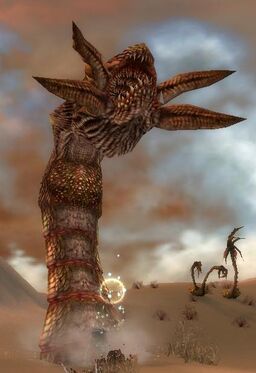 Wurms are gigantic worm-like creatures that burrow in the ground and come out to strike at the unsuspecting adventurers. Wurms generally do not appear on the radar until a player aggros them; then they will invoke a tremor that will knockdown that target and all surrounding allies. They will then come out of the ground to attack their target. If the target tries to move, they will do the same maneuver again.

Wurms are first encountered as Sand Wurms in the Crystal Desert (where players are sometimes warned about their presence by bleached bones or by seeing them devour other creatures at a distance). They are then found in the Southern Shiverpeaks and the Ring of Fire Islands. Wurms can also be found in the corrupted Tombs of the Primeval Kings. Most Wurms have high armor ratings and continuous health regeneration, and some Wurms are known to have unusually high health totals compared to other creatures of the same level. There are also Junundu wurms exclusive only to Guild Wars: Nightfall, which swallow their user and allow them to traverse across areas deemed unsafe for travel like The Desolation.

There are two general categories of Wurms, burrowing wurms and stationary wurms.

Burrowing Wurms: They are hidden underground until aggroed. They will make a few shake effects (around 2~5 pulses) then pop up from the ground and knock down their enemies for 3 seconds. When there are no targets in their melee range, they will burrow into the ground after a few seconds of inactivity and begin to chase their targets. While they move underground, they can't be targeted, but their movement can be tracked by their trails of gray smoke, and they move at about 25% faster than player's normal movement speed. They can be easily shaken off using speed boosting skills as these wurms can't move while popped up.

The behavior for burrowing wurms were changed in the Game updates/20070219 update. Before the update, they used to be incredibly persistent in following their prey and followed targets for a very long time. They also used to knock down players much more frequently against fleeing targets.

Stationary Wurms: All stationary wurms can't move at all and have some form of ranged attack, either the Wurm Siege monster spell or a regular projectile attack.

For a list of all Wurms in the game see: Category:Wurms